Has Romney Made a Deal With the Devil? 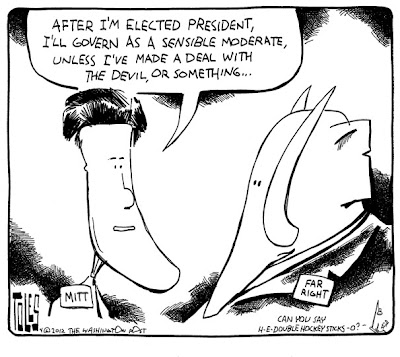 Some readers with whom I agree on more things than they'd probably like to admit feel that I am unduly harsh on Mitt Romney.  As explained in a response to one post comment, in some ways I feel Romney might be an alright president if left to his own devises and inclinations.  Unfortunately, given to day's GOP and the pressure Romney would be under to posture himself for re-election in four more years, I do not believe he'd govern as a moderate.   He's only too willing to seek to please the worse elements in the GOP.  Thus, the cartoon set out above describes what is the likely reality.  And yes, the devil in question is the Christianist/Tea Party base of the GOP.  To win them over, Romney will likely sell his soul.  And that would not bode well for the nation, our foreign policy, gays, women or other minorities.
Posted by Michael-in-Norfolk at Saturday, April 28, 2012