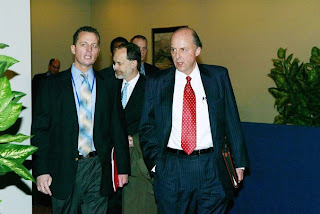 I commented after Mitt Romney hired openly gay Richard A. Grenell to be his campaign's national security adviser and wondered how soon the far right would go into apoplexy over Romney's decision.  AFA's premier gay hater, Bryan Fischer did not disappoint and has been virtually foaming at the mouth.  But it turns out that not only are the knuckle draggers unhappy with Romney's selection, as it has become obvious that Grenell is not necessarily any real friend to LGBT equality (as seems to be the norm for gay Republicans) and has had a bad habit of tweeting nasty comments about women and others.  The end result is that Romney s catching flack from all sides.  The Washington Post looks at the lingering controversy.  Here are highlights:

In one of the first moves depicting a shift to a general election footing, Mitt Romney’s campaign announced last week the hiring of Richard A. Grenell as a national security and foreign policy adviser. This week, the campaign and Grenell were dealing with backlash from the left and right.

Grenell, who spent seven years at the United Nations heading the communications department for the U.S. mission, has had to scrub snarky tweets aimed at women — particularly Democrats and liberals — and the media, while the Romney campaign has had to fend off criticism from social conservatives who object to Grenell’s appointment because he is gay.

In one entry removed from his Twitter account, Grenell wrote of Secretary of State Hillary Rodham Clinton: “Hillary is starting to look liek Madeline Albright.”  Of MSNBC’s liberal-leaning Rachel Maddow, he wrote that she should “take a breath and put on a necklace.”

The snark was not limited to the political opposition. Grenell, a former spokesman for Newt Gingrich, said of Gingrich’s third wife, Callista, that he wondered whether her “hair snaps on” and that she “stands there like she is wife #1” at political events.

Tony Perkins, president of the [hate group] Family Research Council, took issue with Grenell over his criticism of the Bush administration’s failure to sign a December 2008 U.N. resolution that called for decriminalizing homosexuality across the globe.

Bryan Fischer of the American Family Association shared his disappointment with the Grenell pick on Twitter: “Romney picks out & loud gay as a spokesman. If personnel is policy, his message to the pro-family community: drop dead.”

Grenell had an uneasy relationship with some reporters, who found him difficult to deal with, his supporters said, but it is that very aggressiveness with the press and knowledge of policy that makes him qualified to be Romney’s top flack on foreign policy. “If he saw a reporter inaccurately characterize U.S. positions, he would take them to task, but in terms of half answers, half truths, that wasn’t the case,” said Mark Groombridge, who was a top aide for John R. Bolton, then the U.S. ambassador to the United Nations.
Groombridge said Grenell’s sexual orientation is a “nonissue.”  In a statement from the Romney campaign, Bolton called his former aide “a thoroughly professional press spokesperson.”


His sexual orientation may be a non-issue for rational people, but the Christiansts ranks and much of the GOP base are not made up of rational people.
Posted by Michael-in-Norfolk at Wednesday, April 25, 2012