Bob "Governor Ultrasound" McDonnell Does a Fast Dance on Abortion 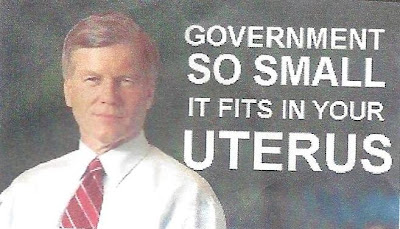 With a number of articles now predicting the Bob "Taliban Bob" a/k/a "Governor Ultrasound" McDonnell's chances in the GOP vice presidential sweepstakes have plummeted, it looks like Taliban Bob is jettisoning some of his decades old opposition to abortion in almost all cases in a desperate attempt to make himself more palatable.  Taliban Bob's spokesman is trying to spin the changes as a case of McDonnell's views not having been properly understood.  He's taken a position for roughly 20 years and only now it's "misunderstood"?  I don't think so.  Not surprisingly, the Virginia Christofascists are none too happy with Taliban Bob.   The Washington Post looks at McDonnell's effort to do his own version of Etch A Sketch reset.  Here are some highlights:

As a legislator, attorney general and governor, Robert F. McDonnell has said he opposes abortion in all but one instance: if continuing the pregnancy would put the woman’s life in danger.  But McDonnell, a possible vice presidential candidate, recently said through his spokesman that he would also allow it in cases of rape or incest.


The statement has prompted many supporters and opponents to believe that he has modified one of his core political stances. Some suspect he has done so to improve his chances of being picked as a running mate for presumed Republican presidential nominee Mitt Romney, whose own position on abortion has shifted over time but makes exceptions for rape, incest and the life of the woman.


“That shocks me,’’ said Olivia Gans, president of the Virginia Society for Human Life, which endorsed McDonnell for governor. “I have never heard him make those comments. It was certainly not his position when he ran for attorney general or governor.’’


But McDonnell spokesman Tucker Martin said the governor’s position has not changed. It has been misunderstood, he said, over the past two decades. He did not explain why McDonnell had not tried harder to correct the record if that was the case.  Since McDonnell’s days as a delegate from Virginia Beach, countless news accounts have reported that he opposes abortion except when the woman’s life is in danger.

Political observers say McDonnell’s inclusion of rape and incest exceptions could help him on the national stage, allowing him to appeal to conservatives who oppose abortion rights while picking up the backing of moderates and independents.

Most pundits weighing McDonnell’s vice presidential prospects say the chairman of the Republican Governors Association’s biggest negative is that he may be perceived as too socially conservative, especially after signing a bill into law last month requiring that women undergo an ultrasound before an abortion.

Tarina Keene, executive director of NARAL Pro-Choice Virginia, said McDonnell is trying to change his views after years of being out of the mainstream.  “Privately, he still holds extreme positions while publicly he is trying to portray himself as someone else,’’ she said. “You don’t switch your viewpoint on this overnight. These are your core values. It’s obvious governor McDonnell is trying to Etch a Sketch his record.’’


For years McDonnell has prostituted himself to the worse religious extremists in Virginia and it would be poetic justice if that is what now sinks his national level ambitions.  Bob, you should have thought about these issues a bit more in the past.
Posted by Michael-in-Norfolk at Sunday, April 22, 2012