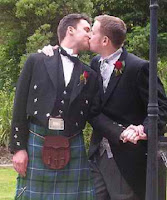 Conservatives - okay, let's call them what they are, extremists - are trying to find anti-gay condemnation in Pope Francis' statements to date during his papal visit to the United States, the reality is that he has said nothing.  And when he has talked about the family, he did not use any of the favorite phrases of the Christofascists and parasitic professional Christian crowd such as "one man and one woman" or "children need a mother and a father."  Even some anti-gay Catholic bishops may be flummoxed that Francis missed his golden opportunity to condemn marriage equality.  Michelangelo Signorile looks at Francis silence on the issue most important to the anti-gay crowd and the bottom feeders of the GOP presidential candidate pool. Has Francis changed official Church doctrine?  No, but compared to the Nazi Pope, Benedict XVI, he was downright conciliatory through his silence.  Here are highlights from Huffington Post:

The United States this past June did something that the Catholic Church and the Vatican have for years railed against: granted marriage equality to its gay and lesbian citizens.  Yet, Pope Francis had nothing to say about it. Not then and not now.

Considering that Pope Benedict often vocally expressed harsh condemnation of marriage equality -- even traveling to Spain to speak out against it when that country was among the first to legalize marriage for gays and lesbians and called it a "threat to the future of humanity"-- it's astonishing how silent Francis is on the issue. I've noted in the past how he had no comment as country after country in Europe legalized marriage for gays and lesbians. And then this past June, he had no comment after the U.S. Supreme Court decision.

And yet, while some of the American media noted the significance of his non-mention of the issue during his address to Congress, others were determined to read into his comments something that simply was not there.

All of this seemed to be part of an insistent mainstream media narrative that the pope, on his trip to the U.S., is making comments that "both sides" -- mostly meaning Democrats and Republicans, conservatives and progressives -- will be happy about. This is simply not true. The pope spent little time in his address to Congress on abortion -- without mentioning the word -- while going full force against the death penalty and emphatically using the term. From climate change to immigration, his passions are clear. Even conservatives are noting that on abortion and gay equality, the pope was subdued.

No mention of marriage being between a "man and woman" or children needing a "mother and a father"? Really? No mention of passing laws that could inhibit marriage for gays and "protect" those opposed to it, like the Kentucky clerk, Kim Davis? That, again, is astonishing. Francis was, after all, speaking to the legislative body that could do something about it -- and which is trying to, with Republicans having introduced the odious First Amendment Defense Act, which would allow clerks like Kim Davis and bakers and florists and others to deny services to gay and lesbian couples.

Also sitting right before Francis during his address to Congress were three of the five Supreme Court justices -- a majority of the majority -- who ruled for marriage equality in June: Justices Sotomayor, Ginsburg and Kennedy. The pope had his big chance to be clear and emphatic about the terrible thing they'd supposedly done and he blew it? Maybe he just didn't care all that much.

The pope's main concern about the family, according to what he said in his comments to Congress, is that people -- children in particular -- seem to be "disoriented and aimless, trapped in a hopeless maze of violence, abuse and despair." That sounds more like someone promoting social programs to help the poor and stop gun-violence than someone trying to end same-sex marriage.

Francis may still be more emphatic at the conference on families he's attending in Philadelphia after his trip to New York. We'll know for sure in a couple of days.

But so far, the pope at best spoke in code -- as when, during his address at the White House, and sounding like Republican political candidates, he talked of defending "religious liberty" in the context of also protecting people against discrimination -- and at worst (for anti-gay conservatives, of course) he completely dodged the issue during his address to Congress, focusing instead on other forces plaguing the family. Whether or not it's all calculated, and though it represents no change of any kind in the doctrine of the church, it's still a win for LGBT people and an angering loss for anti-LGBT forces in America.

Posted by Michael-in-Norfolk at Saturday, September 26, 2015