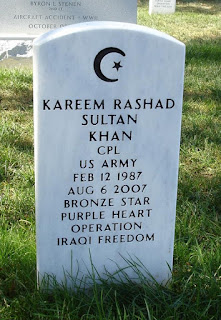 Over the weekend, Republican presidential candidate and, in my view, certifiable lunatic Ben Carson, stated that he did not believe that a Muslim could be president of the United States because Islam was "incompatible with the principles of America."  In short, Carson advocated for a religious test for holding the office of the presidency - something contrary to the U.S. Constitution.  Such an extremist statement from Carson should come as no surprise since he has also stated that slavery was the best thing to happen to blacks since it brought them to Christianity.  Carson embodies the threat that Christofascists pose to constitutional government.  They are every bit as opposed to the principles of America as Islamic extremist but for the level of violence most are willing to use.  Both groups want a theocracy.  Carson belongs in an asylum.  Senator Harry Reid rightly ripped Carson a new one in a Facebook post.  Here are highlights:

In Arlington National Cemetery, there is a white headstone, which, like so many others, marks the final resting place of a courageous service-member who gave his life in combat. This grave belongs to Kareem Khan of New Jersey, who was just 20 years old. Kareem was Muslim.

Kareem’s rank was that of Specialist in the Stryker Brigade of the U.S. Army’s 2nd Infantry division. He received a Purple Heart, Bronze Star, and a medal for good conduct. Like thousands of other soldiers in Iraq and Afghanistan, Kareem Khan sacrificed everything for his country. Kareem gave, as President Abraham Lincoln said, “the last full measure of devotion” for the United States.

Shame on him. Shame on any person who spews such vile, hateful rhetoric. The nearly three million Muslim in this country are part of the fabric of America. They teach in our schools, fight in our military, and serve in Congress. Congressmen Keith Ellison of Minnesota and Andre Carson of Indiana – both Muslim – have represented their districts and states with distinction.

Sadly, this is just another example of Republican candidates refusing to speak for three million Muslim Americans. We saw it last week with Donald Trump, as he refused to denounce bigotry at his own campaign rally. If these Republican candidates are incapable of going to bat for America’s Muslim community, then they shouldn’t run for President of the United States.

I call upon every Republican to denounce Ben Carson’s disgusting remarks. That shameful intolerance and bigotry should have no place in America today. Sadly, it seems to have a lasting place in the Republican Party. Republicans should open their eyes and take note of the contributions of our country’s Muslim community. Until they do, none of them will be worthy of leading this nation.

As with gays, Muslims simple do not count as fully human or as full citizens in the minds of the religious zealots who have taken over the GOP base and to whom GOP candidates willingly prostitute themselves.   If anyone should be barred from public office, perhaps it should be Christofascists since they increasingly refuse to uphold the Constitution of the United States.
Posted by Michael-in-Norfolk at Tuesday, September 22, 2015