The Republican War on Muslims 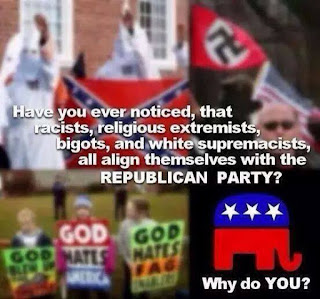 Increasingly, the Republican Party is defined by who it wages war against.  The GOP has continued a war on gays, a war on women, a war on the poor, a war on labor union members, a war on Hispanics, and now it has made official its war on Muslims.  Virtually anyone who is not a white, knuckle dragging far right Christian is now the enemy.  As one reader noted, it used to be that such bigotry was at least signaled in coded dog whistle messages.  Not any more, the bigotry and demands for special rights to discriminate are displayed openly and worn as a badge of distinction.   The irony is that this now open war on Muslims was made official by Ben Carson, a black who candidly doesn't have a chance in hell of winning the GOP nomination because to most of the GOP base a black president is anathema to their demands for perpetual white privilege. The New York Times lays into the Republican Party in a main editorial today.  Here are excerpts:

The Republican presidential candidate Ben Carson is drawing criticism over the bigoted comments he has been making recently about Muslims. It is well deserved, and is not a matter of “P.C. culture,” as Mr. Carson has claimed. Nor does Mr. Carson represent some minor fringe element in the Republican Party.

This latest sordid mess to arise from the G.O.P. nomination contest touches on bedrock American values, constitutional principles and American history. It reflects a pernicious habit among the leaders of the Republican Party to play with fire by pandering to an angry, disaffected and heavily white base by demonizing selected minorities. Muslims are just the current target.

Leave aside for a moment the unintentionally funny spectacle of a member of the current Republican Party declaring that religion should be kept out of public life, and that Mr. Carson, as an African-American, is a member of a much belittled minority. The freedom of religion embedded in the First Amendment rules out the very idea of a religious test for public office, as John F. Kennedy so eloquently argued and then proved by becoming the first Catholic president.

Mr. Carson is hardly alone in his demagogy. Donald Trump has accused President Obama of being foreign born, and is continuing to stoke suspicions that Mr. Obama is a Muslim — a myth that a disturbing number of Republicans believe.

The phenomenon isn’t new. Running for president in 2008, Senator John McCain was praised when a voter called Mr. Obama an Arab and Mr. McCain replied by calling him a “decent family man, citizen,” but he didn’t rebut the lie. Former President Bush sometimes said the right things, but instituted a system of detention, torture and trial that applies only to Muslims.

Anti-Muslim sentiment is playing out in the refugee crisis caused by hundreds of thousands of people, mostly Muslims, fleeing wars in the Middle East. The United States recently agreed to take an additional 30,000 refugees per year by 2017, but some conservatives are objecting, claiming they will provide a recruiting pool for radicals.

Closing the country’s doors to Muslims would buy into Mr. Carson and Mr. Trump’s vilification and dishonor the thousands of Muslims who have joined Irish, Italians, Germans, French, Jews, Russians, Latinos, Africans and many others in becoming honorable citizens and perhaps, one day, president.

Posted by Michael-in-Norfolk at Wednesday, September 23, 2015