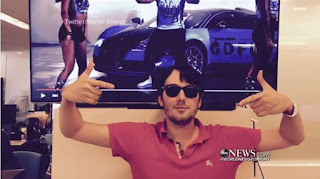 In the 2012 election cycle Mitt Romney was his own symbol of vulture capitalism - the GOP's god after tax cuts for the wealthy - and it came back to haunt him.  Now, as we begin the 2016 election cycle, Martin Shkreli, the former hedge fund manager known as the “Pharma bro,” has singlehandedly underscored the evils of unfettered capitalism.  Shkreli accomplished this by buying the rights to Daraprim, a drug used to treat severe infections in AIDS patients and infants, and then increasing the price to consumers by 5000%.  Drug prices in America are out of control - one can get the identical drugs in Canada for far less - and perhaps Shkeli's greed will trigger some much needed oversight of the shockingly greedy pharmaceutical industry.  A piece in Think Progress looks at the phenomenon.  Here are highlights:

Is the “Pharma bro” coming to Congress? He will if Rep. Elijah Cummings (D-MD) gets his way.

Cummings, the Ranking Member of the House Committee On Oversight And Government Reform, has requested a hearing next week to question Martin Shkreli, the former hedge fund manager known as the “Pharma bro.”

Shkreli has attracted attention since he hiked the price of Daraprim, a drug used to treat severe infections in AIDS patients and infants, by 5000%. Shkreli is the CEO of Turing Pharmaceuticals.
In an interview, Cummings called Shkreli’s actions “criminal.”

As a member of the Democratic minority, Cummings cannot unilaterally call the hearing. But he wrote a letter to Chairman Jason Chaffetz on Tuesday, requesting a hearing be scheduled.

Cummings notes that the committee had previously “agreed unanimously to investigate the increasing price of certain prescription drugs” but “has held no hearings and has issued no document requests to drug companies this year.”

Tuesday night, Shkreli told ABC News he would reduce the price of Daraprim. He would not specify the new price.

We need a national health care system that would bar sleaze bags like Shkreli from engaging in such vile conduct.
Posted by Michael-in-Norfolk at Wednesday, September 23, 2015