Why Pope Francis Terrifies the Right and GOP 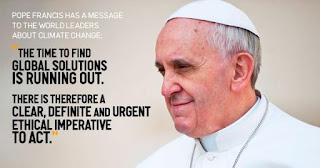 No one has done more to inject religion into politics than the Republican Party and its masters among the Christofascists and the nations plutocrats such as the Koch brothers.  The former have done so in an effort to force their increasingly foul religious beliefs on all Americans - and to crush out anything that threatens the fairy tale world they live in - while the latter have do so out of cynicism and a desire to feed their greed and push a vulture like version of capitalism.  While Francis drinks from the dame Kool-Aid when it comes to obsession with all things sexual, on most other fronts he remains in touch with objective reality and part of that reality is that the far right's efforts to build a new Gilded Age and to rape the Earth of its resources run directly afoul of the Gospel message.  Stated another way, Francis sees the so-called "prosperity gospel" so loved by the professional Christian crowd (with themselves a prime beneficiaries) as a lie and blasphemous.   His pounding of the idols of the far right terrifies them because (i) the fear others will see that their economic policy emperor has no clothes, and, worse yet, (ii) that they are utterly wrong.  A piece in Salon looks at this phenomenon.  Here are excerpts:

Republican legislators who attended Pope Francis’ address to Congress were apparently relieved that he didn’t threaten them with fire and brimstone, and that he said that human activity is causing “environmental deterioration,” rather than using the dreaded words “climate change” or “global warming.” What remains clear, however, is that they won’t listen to anyone about this subject – not the overwhelming majority of scientists, not economists, not public policy analysts, and not the world’s most famous religious leader.

All of this raises an interesting question: Why exactly are the Republicans so determined to ignore reality? Why won’t they listen to anyone? The answer is actually simple: The reality of climate change demonstrates that progressives are right and they are wrong. Not just wrong about the effect of human activity on the environment, but wrong about their basic approach to the problems of the modern world.

Republican ideology is based on the idea of freedom for capitalists (another concern voiced by Pope Francis). For progressives, freedom involves the ability of ordinary people to express themselves, to choose their own level of religious observance and, increasingly, to receive the education and healthcare that they need to function in modern society. For conservatives, it means the ability of property owners and large corporations to use their economic power any way they wish, to determine exactly how they will treat their employees and what they will say to the consumers who depend on the products they produce.

Americans have rejected this approach for over 100 years, perhaps since the presidency of Theodore Roosevelt. . . . . we have insisted that the impact of these enterprises on the environment needs to be regulated as well, and that they cannot be permitted to pour poison into our waters and fumes into our air at will.

Recognizing the reality of climate change will necessarily lead to further forms of regulation. That reality emphasizes what physical and social scientists have come to recognize in recent years: that the most recent geological era (usually called the holocene) has ended, and that we are now in an entirely new situation, often described as the anthropocene – the era of human domination.

All this means that conservatives are simply wrong. We’ve gone past the point where the large enterprises that determine the health of the economy, our working people, our environment, and now our planet, can be left to do what they wish.

People don’t like to admit that they are wrong, however. Children stamp their feet or burst into tears. Adults concoct bizarre conspiracy theories (tens of thousands of scientists, from all over the world, have joined together to perpetrate a hoax), engage in outright denials in the face of overwhelming evidence (Marsha Blackburn says that someone – she won’t say who — told her that the Earth is getting cooler) and insult anyone who tells them something they don’t want to hear (even if that person is the leader of a religion they’ve been touting as the truth for decades). But the conservatives are wrong — wrong about climate change and wrong about their entire approach to governing our nation. It’s time for everyone else to stop listening to them.

It is far past the time that conservatives cease being afforded credibility.  Sadly, lazy  journalists cling to their "fair and balanced" fantasy which allows them from having to do the work to challenge bullshit statements and lies from both Republicans and foul Christofascists such as Tony Perkins. Pope Francis may be wrong on matters of sexuality and the control of women's bodies - why is it the celibate men with no sexual or head of family experience claim to be the authorities? -  he is right on the basic falsehood the conservative agenda in America.
Posted by Michael-in-Norfolk at Saturday, September 26, 2015