Pope Francis And The Right-Wing Bubble 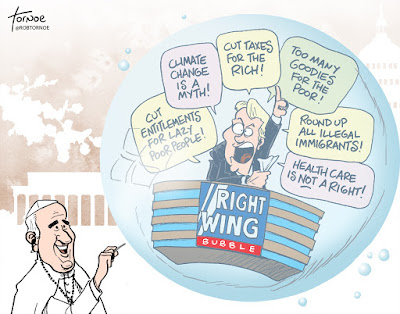 While Pope Francis has yet to do anything to change the Roman Catholic Church's anti-gay, anti-women, and sex obsessed dogma - much of which traces back to the 13th century - it is nonetheless most entertaining to see him making pin pricks to the GOP bubble that is (i) tethered from objective reality, and (ii) mostly in direct contradiction to the Gospel message.  A piece in  Salon looks at the phenomenon. Here are excerpts:

Despite all the talk that Pope Francis’ address to Congress wouldn’t be political or partisan, it turns out it was both. And, as I predicted here in Salon, it definitely leaned to one side of the aisle. In fact, if you were a conservative Republican, Thursday morning in the Congress was not your finest moment, as Pope Francis laid bare all the ways that the Republican agenda counters Catholic social teaching, from its harsh treatment of immigrants to its fossil fuel-burning disdain for the natural world.

And Francis’ call for politicians to work for the common good was an implicit rebuke to the do-nothing, obstructionist GOP agenda that’s in service to their corporatist, Chamber of Commerce overlords.
Here are the five key moments in Francis’ speech that made conservatives squirm more than any others:

The shout-out to Dorothy Day. Francis commended four Americans in particular, whom he held up as examples of pursuing the common good: Abraham Lincoln, for his pursuit of liberty; Martin Luther King Jr., for his commitment to nonviolence and pluralism; Trappist monk Thomas Merton, for his commitment to dialogue and peace; and Dorothy Day, for her “social activism, her passion for justice and for the cause of the oppressed.” . . . None of them are exactly conservative, but Day in particular is noted as a radical social activist. . . . Day was outspoken in her support of pacifism and labor rights.

The abortion switcheroo. In defiance of the specific guidance not to try to score political points by clapping at partisan applause lines in Francis’ speech, congressional conservatives leapt to their feet the moment Francis delivered the Vatican’s standard coded language about abortion, mentioning “our responsibility to protect and defend human life at every stage of its development.” Imagine their shock when he immediately followed that with, “This conviction had led me, from the beginning of my ministry, to advocate at different levels for the global abolition of the death penalty.” Psych.

Calling arms deals “money drenched in blood.” Speaking of death, what about all those arms deals the Republicans are so fond of? Francis wanted to know who is selling the bad guys all these weapons and why: “Why are deadly weapons being sold to those who plan to inflict untold suffering on individuals and society?” The answer, according to the pontiff, is “money: money that is drenched in blood, often innocent blood. In the face of this shameful and culpable silence, it is our duty to confront the problem and to stop the arms trade.” I’m sure the GOP and all the defense contractors who give them money will get right on that.

Reminding the GOP we’re all foreigners. As in his speech at the White House on Tuesday, Francis felt the need to once again remind those who are making intolerance toward immigrants their political stock-in-trade that they, like him, are likely the descendants of immigrant families.
In one of the most moving passages of his speech, Francis said, “Let us seek for others the same possibilities which we seek for ourselves. Let us help others to grow, as we would like to be helped ourselves. In a word, if we want security, let us give security; if we want life, let us give life; if we want opportunities, let us provide opportunities.”

Confronting the climate naysayers. Francis made it clear that combating climate change, development and technology can coexist. He explicitly rebuked many conservative critics of his climate change encyclical “Laudato si,” who claim that he is anti-commerce and wants to stifle development or reduce the world to subsistence-level farming to stop climate change. “The right use of natural resources, the proper application of technology and the harnessing of the spirit of enterprise are essential elements of an economy which seeks to be modern, inclusive and sustainable,” he said, adding, “In this regard, I am confident that America’s outstanding academic and research institutions can make a vital contribution in the years ahead.”

On the plus for conservatives side, Francis did talk about the need for “the voice of faith to continue to be heard,” but in the case of this particular voice, conservatives probably wish he would just be quiet.

Posted by Michael-in-Norfolk at Friday, September 25, 2015