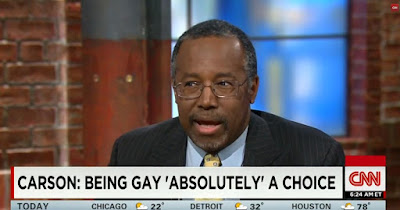 If one wants to see just how low the Republican Party has fallen, look no farther than presidential nominee candidate Ben Carson.  The once renown neurosurgeon - who some him knew him in the past have shared that they wonder if the man has had a nervous breakdown or what some other mental breakdown -  has stated that Darwin was in league with Satan when he developed the theory of evolution.  And video tape documents Carson's lunatic statements, so denial will be difficult.  At est, he can claim he did not mean what he said and was merely prostituting himself to Christofascist.  The take away? Do we really want a man who (i) is an opportunistic liar, or (ii) seemingly suffers from mental illness and/or out right insanity in the White House?  Little Green Footballs looks at Carson's troubling batshitery.  Here are highlights:

At LGF we’ve written several times about GOP presidential candidate Dr. Ben Carson’s rejection of the scientific theory of evolution in favor of young Earth creationism. But here’s a video that graphically demonstrates just how regressive Carson’s anti-science beliefs are.

In this speech delivered to the Adventist News Network’s “Celebration of Creation” in November 2011, Carson shows ignorance of basic geology, attributes fake quotes to “evolutionists,” ridicules scientists, and last but not least, says Charles Darwin was influenced to come up with the theory of evolution by none other than… yes, Satan. The Horned One. His Nibs. In Carson’s words, “the Adversary.”

It’s shocking and disturbing that one of the frontrunners in the GOP campaign for president holds these kinds of Dark Ages anti-science beliefs. But while Carson’s statements may seem extreme, nearly all of the GOP candidates in this race are creationists.

In addition to everything else that’s wrong with them in 2015 (and that’s plenty), the Republicans are the party of hard core science denial.

Some quotes from the video, transcribed by Daniel W. VanArsdale:

[20:56] “… there is abundant evidence, geological evidence, that there was a worldwide flood. Go up into the Andes Mountains and see all those fossils on the top of those mountains.

[31:03]. “Well, now what about the big bang theory? I find the big bang really quite fascinating. Now here you have all these highfaluting scientists, and they are saying there was this gigantic explosion and everything came into perfect order. [31:19] … [32:16] Well, but I mean it’s even more ridiculous than that, because our solar system, not to mention the universe outside of that, is extraordinarily well organized to the point where we can predict 70 years away when a comet is coming. Now that type of organization, to just come out of an explosion? … [32:43] And then even if you want to use their own scientific theories, you know you’ve got this mass spinning and then it explodes. In physics we have something we call angular momentum and it is preserved, so it should be preserved in any orbit of anything that is effected by gravity around a planet, which means everything has to traverse in the same direction. Well it doesn’t! There are many planets that have satellites and moons that go in the opposite directions. So that doesn’t work with angular momentum.” [33:19]

[36:49] “How are flowers able to reproduce? Pollination. How does pollination occur? Bees and other creatures. Now according to evolution, plants came along before the bees. So how did the plants reproduce? … [37:41] … according to evolutionary model, you know we really came from an ameba. And amebas, they just like split and then there’s two amebas. So it seems to me like according to evolutionary model you do things that are efficient. So rather than going out and looking for a mate you would just divide, and then there would be two of you. … [38:16] But, you know, things are supposed to work in an efficient way, so according to the evolutionary model we would be less pugilistic, we would be much more logical, we would be much more creative, we wouldn’t be going around fighting each other and cutting off people’s heads anymore. Because that stuff would be extinguished and we would have evolved into something much better. According to the creation model, in which we have an adversary, it’s very easy to explain why people act that way, it’s because they have choice and because there is an adversary out there. [38:57]

[answering a woman’s question, 45:07] “I personally believe that this theory that Darwin came up with was something that was encouraged by the adversary [Satan], and it has become what is scientifically politically correct. Amazingly, there are a significant number of scientists who do not believe it but they are afraid to say anything.”

As I have said before, I increasingly view conservative/fundamentalist religious belief as demonstrative of serious emotional and mental illness.  If that is the case, then all of the GOP candidates belong under psychiatric care.
Posted by Michael-in-Norfolk at Thursday, September 24, 2015