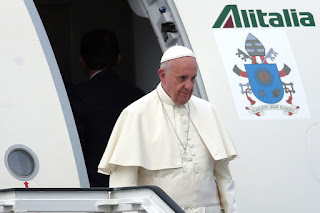 Not to beat a dead horse, but the growing Republican angst over Pope Francis' visit is becoming almost comical - it's as if the self-proclaimed party of God realizes that it is about to be called out in much the manner that Christ called out the Pharisees in the Gospel stories.  Other than perhaps arguably on the issue of abortion, nearly every policy currently pushed by the Republican Party goes against the message of caring for the poor, the hungry, the sick and the homeless.  Instead, the GOP worships greed, vulture capitalism, denigration of the poor and a mindset that sees those deemed "other" by the shrinking angry white party as little more than human garbage.  A piece in Salon looks at the meltdown over taking many in the Republican Party.  Here are excerpts:


Faced with the distinct possibility that the man who is currently the world’s most beloved and respected moral authority will publicly shred their governing ideology and rebuke their position on issues from immigration to climate change, conservatives are responding by having a complete meltdown over Pope Francis’ impending visit.

In the equivalent of putting your fingers in your ears and singing “La! La! La!”

Republican Catholic Congressman Paul Gosar announced that he will boycott Pope Francis’ Thursday speech to Congress because the pope may talk about climate change. As he writes in Time, he was super psyched to hear Francis talk about the persecution of Christian minorities in the Middle East, the “enslavement, belittlement, rape and desecration of Christian women and children,” and the “condoned, subsidized, intentionally planned genocide of unborn children by Planned Parenthood.”

But, to his eternal disappointment, Francis reportedly “instead intends to focus the brunt of his speech on climate change—a climate that has been changing since first created in Genesis.” Even worse, according to Gosar, is the fact that “this climate change talk has adopted all of the socialist talking points, wrapped false science and ideology into ‘climate justice’ and is being presented to guilt people into leftist policies.”

Gosar’s objections seem positively statesman-like compared to the stream of anti-Francis vitriol unleashed by Washington Post columnist George Will, who accuses a man beloved for his humbleness and sincerity of “embod[ying] sanctity” but “trail[ing] clouds of sanctimony” and embracing “ideas impeccably fashionable, demonstrably false and deeply reactionary.”

What Will and Gosar have in common with other conservative critics of Francis is their assertion that it’s fine for the pope to be politically involved in issues that top their agenda, such as banning abortion or fighting the legalization of same-sex marriage, but not OK for the pope to be involved in progressive political issues, especially those that undermine the fundamentals of libertarian capitalism. Then the church is being “political” and can be ignored; apparently it’s just a matter of whose politics you are promoting.

At the root of the venom directed against Francis is the fear that he will decouple the carefully cultivated alliance between free-market, anti-government conservatives here in the U.S. and the leadership of the Catholic Church, which for decades has assured Catholics that they could merrily back anti-redistributive, anti-environmental, and anti-labor policies as long as they opposed abortion. The removal of the anti-abortion trump card is an existential threat to the existing political alignment and the free reign of the free market.  . . . . that’s an endgame that conservatives can’t tolerate, even if a comes from a leader they once considered infallible.

The GOP needs to be called out.  The party has become something incredibly ugly, and it's largely due to the falsely pious "godly Christians."

Posted by Michael-in-Norfolk at Tuesday, September 22, 2015