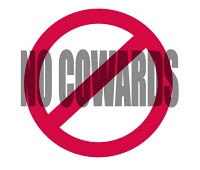 In authoring this blog, I do not hide my identity.  I expect nothing less from those who leave comments if they expect them to be published.  I do not give a platform for cowards who seek to attack me personally or preach to me about why I am going to Hell - there have been MANY such anonymous comments over the years, some even threatening physical violence and/or death - or who try to dispute my views without having the courage to identify themselves.  For a time I only allowed comments from those registered through Google, Open ID or other sites such sites so that I could track potentially dangerous/threatening comments.   A while back I reopened comments to unregistered individuals, but retained the ability to approve or disapprove whether the comments were published.


Recently I wrote about  Robert Cunningham, the Roman Catholic Bishop of Syracuse, New York, the diocese I grew up in until going away to college, who testified under oath that the victims of predator priest shared in culpability with the predatory priests who sexually molested them.  I noted that his mindset is akin to that of those who are only too ready to blame female rape victims of "having asked for it."


This was too much for some sheep like individual seemingly from the Syracuse area who left a harangue that Bishop Cunningham was "blameless"  and that the story had been tainted and twisted by both the local media outlets and S.N.A.P. , an organization notorious for anti-Catholic actions and Catholic Church hatred."  There was much more, but given the cowardice of the commentor, it will never be published.  If this individual wants to have his/her comment published, then grow a spine and be willing to identify yourself.

I would encourage readers who want their comments published - whether you agree with me or not - to have the guts to identify yourself.
Posted by Michael-in-Norfolk at Sunday, September 20, 2015

I think your decision is just alright. :)
People should have the right to stay anonymous online, however.

I'm not shameless to say I'm from FIT STUDS blog. Lots of love!

I think his decision strikes the perfect balance. Yes, Fit Studs, people are entitled to remain anonymous online, but they don't "have the right" to publish anything they want on another person's internet property.

Free speech is about not restricting another persons right to go into the public square and say what he or she chooses. It's like the story of the Benham brothers, and all the claims that their right to free speech was being violated by the Learning Channel (or HGTV, or whoever it was). No, they don't have, and neither does anyone else, a constitutionally protected right to their own TV show. They have the right, and have exercised very frequently in Charlotte, to say whatever ugly things they want in public, government situations. City Council meetings, etc.

The same is true here. This is Michael's little piece of the internet, and he gets the final say about what is posted here. And if he's not interested in posting the rantings of anonymous cowards, that is his right, jut like HGTV gets to decide who will have a show on their network.

And while I agree with your assertion about people having a right to be anonymous...just remember this...what the founders were righting about, in their time, was your right to go into the public square and say what you want. That meant you had to be there, and show your face...so even though I'll go along with you, I'm fine if people wish to give no credence to faceless voice. It is un-American.