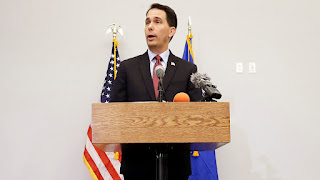 Candidly, at times it is hard for me to decide which of the Republican Presidential nominee candidates is the most despicable.  There are so many contenders, almost all of whom spew coded messages of racism, anti-Hispanic bigotry, homophobia and a contempt for women, not to mention an agenda that makes war on the poor and less fortunate.  But certainly, Scott Walker has been among those at the top of my list.  In his war against unions in Wisconsin he has shown himself to be against average Americans and their families, and his ridiculous anti-Muslim and anti-climate change harangues have shown that he's either an idiot or a knowing liar.  Thus, I was most delighted to hear that Walker has suspended his presidential campaign.  Indeed, the most decent thing I have heard him say were the words of his brief statement announcing the suspension of his campaign.  Here are highlights on this welcome development from the New York Times:


Gov. Scott Walker of Wisconsin, whose early glow as a Republican presidential contender was snuffed out with the rise of anti-establishment rivals, announced on Monday that he was quitting the race and urged some of his 15 rivals to do the same so the party could unite against the leading candidate, Donald J. Trump.


Mr. Walker’s pointed rebuke of Mr. Trump gave powerful voice to the private fears of many Republicans that the party risked alienating wide swaths of the American electorate – Hispanics, women, immigrants, veterans, and most recently Muslims – if Mr. Trump continued vilifying or mocking those groups as part of his overtures to angry and disaffected voters.

Still, Mr. Walker’s exit was not selfless: He was running low on campaign cash, sliding sharply in opinion polls, losing potential donors to rivals and unnerving supporters with a steady stream of gaffes, like saying he would consider building a barrier wall along the Canadian border.

Appearing ashen and drained at a brief news conference late Monday in Madison, Mr. Walker said the Republican presidential field was too focused on “how bad things are” rather than on “how we can make them better for everyone.” Without naming Mr. Trump, Mr. Walker issued a plea to fellow candidates to coalesce around a different Republican who could offer a more “optimistic” vision and guide the party to a victory next year that, he admitted with sadness in his voice, he could not achieve himself.

Mr. Walker’s departure is likely to have little impact given the sprawling field. He was competing most aggressively in Iowa, which he deemed a must-win state, but he had fallen from first to 10th place in a recent poll there. He also drew support from less than one-half of 1 percent of Republican primary voters in a recent CNN national poll.

If the demise of Mr. Walker’s campaign underscores anything, it is the increasingly intense pressure that candidates are under to raise enormous sums of money not only for their political operations but also for their “super PACs.”

The need to raise money has had the effect of turning the traditional state-by-state nomination fights into national contests, in which candidates need to prove themselves to donors across the country – rather than merely win over voters in the handful of states that hold the earliest caucuses and primaries. Mr. Walker increasingly tailored his message for Iowans, taking some sharply conservative stands on issues like immigration and same-sex marriage that could pose problems with moderates.

My analysis is simple: good riddance!
Posted by Michael-in-Norfolk at Monday, September 21, 2015

almost all of whom spew coded messages of racism, anti-Hispanic bigotry, homophobia and a contempt for women, not to mention an agenda that makes war on the poor and less fortunate.


Sadly, Michael, they're no longer bothering to speak in code.