The GOP's Betrayal of America 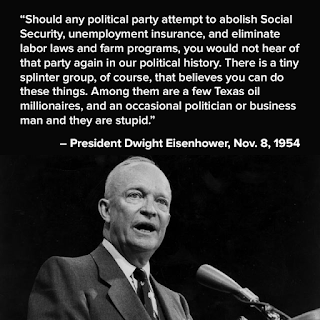 I typically do not read columns by David Brooks in the New York Times because he is, in my view, generally wrong and takes a regressive position.  But even the perennially wrong can on occasion get it right as Brooks does today in a column bemoaning what has become of the Republican Party and American conservatism in general and how the trend is harming the nation and betraying its founding principles and mindset.  While he looks at the the trends in the conservative movement, he fails to look at the real root cause in my view: the rise of fundamentalist Christians within the GOP.  Personally, I generally view religion as a scourge on the soul of mankind.  But that scourge becomes a raging cancer when the religion is fundamentalist - whether Christian or Muslim - because it focuses on hatred of others and anyone and anything that threatens its ignorance embracing tenants.  The good news, if any, is that the GOP is hopefully headed towards a eventual much deserved death.  In the process its devotees are likely also hastening the decline of Christianity in America.  Here are excerpts from the column:

These commentators and candidates look backward to an America that is being lost. Ann Coulter encapsulated this attitude perfectly in her latest book title, “Adios, America.” This is the philosophy of the receding roar, the mourning for an America that once was and is now being destroyed by foreign people and ideas.

Out of this backward- and inward-looking mentality comes a desire to exclude. Donald Trump talks falsely and harshly about Hispanic immigrants. Ben Carson says he couldn’t advocate putting “a Muslim in charge of this nation.”


As Peter Wehner, a longtime conservative writer who served in the Bush administration, wrote in the magazine Commentary: “The message being sent to voters is this: The Republican Party is led by people who are profoundly uncomfortable with the changing (and inevitable) demographic nature of our nation. The G.O.P. is longing to return to the past and is fearful of the future. It is a party that is characterized by resentments and grievances, by distress and dismay, by the belief that America is irredeemably corrupt and past the point of no return. ‘The American dream is dead,’ in the emphatic words of Mr. Trump.”

It’s not exactly breaking news that this is ruinous to the long-term political prospects of the party.


But it’s also bad for the spirit of conservatism. American conservatism has always been different than the conservatism found on continental Europe and elsewhere. There it was based on blood and soil, here on promise.
American free market and religious conservatives have traditionally embraced a style of nationalism that is hopeful and future minded. . . .But this hopeful nationalism is being supplanted in the G.O.P. by an anguished cry for a receding America.


This pessimism isn’t justified by the facts. As a definitive report from the National Academies of Sciences, Engineering and Medicine recently found, today’s immigrants are assimilating as fast as previous ones. They are learning English. They are healthier than native-born Americans. Immigrant men age 18 to 39 are incarcerated at roughly one-fourth the rate of American men.

It is one thing to think Democratic policies are wrong. It is another to betray the essential American faith and take a reactionary attitude toward life. This is an attitude that sours the tongue, offends the eye and freezes the heart.

Posted by Michael-in-Norfolk at Friday, September 25, 2015