Peter King: Boehner Resignation = "the Crazies Have Taken Over the GOP" 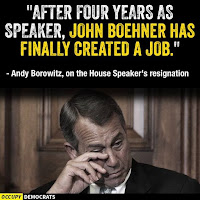 New York Republican Peter King is not what most would consider a moderate, but in today's utterly insane Republican Party, King actually looks more and more sane in relative terms.  With John Boehner's sudden announcement that he will resign as Speaker of the House and from Congress entirely by the end of October, King has lamented that it is clear that "the crazies" have taken over the GOP.  While I have never liked Boehner - who I see as a largely spineless man - his main role has been to try to rein in the utterly insane in the House GOP.  With him gone, what type of utter lunatic will the swamp fever ridden Christofascit/Tea Party controlled political whores try to put in Boehner's place.  Here are highlights from Politico:

“I think it signals the crazies have taken over the party, taken over to the party that you can remove a speaker of the House who’s second in line to be president, a constitutional officer in the middle of his term with no allegations of impropriety, a person who’s honest and doing his job. This has never happened before in our country," King said in an interview with CNN's Dana Bash on Friday afternoon. "He could have stayed on.”

“There was actually, I thought, like a hush in the room for a few seconds where no one — people like looked at each other — they couldn’t believe it. And then he read the prayer of St. Francis, which was very moving," King said of the moment when Boehner told fellow lawmakers that he was leaving office.

"I’m not a psychologist but I think John probably pretty much decided that the more he did, the more friction would be caused, and that he probably thought it was best for him to leave soon anyway, which I think is wrong," he said. "But having the pope here yesterday just sort of put John in the frame of mind [that] it’s time to leave."

Boehner's decision to resign is "like throwing raw meat" to more extreme factions of the caucus who are trying to "hijack and blackmail the party," King said. "They’re not going to see it as a gesture of peace, they’re going to just look for more."

“I think whoever runs for speaker should make it clear that he’s not going to give in to these people. We’re not going to appease them," he concluded. "The time for appeasement is over.”


Posted by Michael-in-Norfolk at Saturday, September 26, 2015

That resignation followed so quickly on the pope's address to Congress made me think that Boehner was shamed into leaving the vile company he has been attempting to lead. I was concerned I was committing the post hoc propter ergo hoc fallacy, though I am wary of "coincidences." I never expected to take comfort from Pete King's reasoning about anything, but here I am!