Poll: Americans Like Pope Francis Much More than His Church 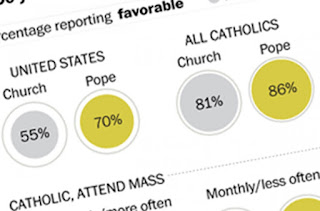 As a former Catholic - 10 years an altar boy, daily mass attendee for nearly nine years while trying to "pray away the gay" and 4th Degree Knight of Columbus - I know  all too well about the Roman Catholic Church's obsession with imposing a 12th century under standing of "natural law" on all Catholics.  Never mind the fact that those who authored the concept of the Church's "natural law" were ignorant and wholly uneducated by today's modern knowledge of science, medicine and of course, sexual orientation.  I have also have closely followed the Church's worldwide sex abuse scandal that first erupted in Boston right as I was beginning to  "come out" - a scandal that involved cover ups orchestrated even by "good popes" such as John XXIII.  It is not without reason that one in eight Americans - i.e., 40,216,125 people based on September 2015 census estimates - consider themselves as "former Catholics."  True, there are still the sheeple who fill the pews and continue to believe whatever crap is dished out to them from pulpits, but the Church is facing real trouble, especially with the younger generations - including Hispanics - fleeing religion in the face of American bishops who preach hate and division and homophobia.   The Washington Post looks at the disparity between respect for Francis and low approval of his church.  Here are highlights:

Pope Francis is adored by American Catholics and non-Catholics, who have embraced his optimism, humility and more inclusive tone. But as the 78-year-old pontiff arrives in the United States for his first visit, the public’s view of the Catholic Church is not nearly as favorable, according to a new Washington Post-ABC News poll.

[I]n a country moving steadily away from organized religion and with the denomination still haunted by a clergy sexual-abuse scandal, there is no evidence that Francis’s likability has boosted Catholic identification, worship attendance or prayer.

The poll, along with interviews with religious scholars and Catholics around the country, suggests that the perception of Francis is different from the experience in the pews.

“The church is not grounded in the human experience,” said William D’Antonio, a Catholic University sociologist who researches U.S. Catholicism. “The pope is. This pope has an understanding I’ve not seen in any other popes. He talks like a person who actually knows something about human life.”

But the pope’s pop culture popularity helps obscure this fact: He has made no significant changes to Catholic teaching on issues that sometimes put the papacy at odds with the church’s American parishioners.

That’s why Mary Barry, 57, a small-business owner in Arlington, Tex., and her husband said they are taking “a wait-and-see approach” on whether to attend Mass regularly, three years after stopping. They decided that the church no longer spoke to them.

The Barrys are not unique. Roughly 1 in 8 Americans consider themselves former Catholics, and most who still identify with the faith do not attend weekly Mass, according to the 2014 Pew Religious Landscape Survey. While the Catholic Church’s retention rate is similar to that of other Christian denominations’, it has struggled to attract new members to offset steady losses. For each person who has converted to Catholicism, there are more than six who have left the church.

In the Post-ABC poll, 45 percent of self-identified Catholics reported attending Mass nearly once a week or more often, 19 percent attended monthly, and 35 percent said they attend less often or never.

While non-practicing Catholics said in follow-up interviews that they admire Francis, they do not like that the church is not softening its stance on same-sex marriage, the role of women in the church and abortion.

Wishful thinking is probably playing some role in the gap.

Kathleen Cummings, director of the Cushwa Center for the Study of American Catholicism at the University of Notre Dame, says the gap in perceptions between Francis and the institutional church is tied to the pontiff’s “leading with the positive.” . . . . “Francis focuses on what the church says yes to before all the things it says no to,” Cummings said. “And in this country, for the last few decades, we heard a lot first about what the church says ‘no’ to.”

The pope’s activism on social, economic and environmental issues is supported by a wide swath of Catholics and non-Catholics, with just 14 percent of Americans wishing he would be less active on those issues.
[W]eekly attending Catholics are less supportive of many items on liberal Catholics’ wish list: allowing women to become priests, accepting homosexuality and ending opposition to all abortions.

A long-term challenge for the pope is whether he can bring together those who are devout and distrustful of departures from the canon, and those who are disaffected and hopeful that the church will acknowledge societal changes.

Cummings, the Notre Dame scholar, said the pope’s trip could shrink the gap between his popularity and the church’s if he can change the behavior of American bishops.

[D]uring a Christmas message last year at the Vatican. He told top church bureaucrats that they had “spiritual Alzheimer’s” and that sometimes they see themselves as “lords of the manor, superior to everyone and everything.”

What is clear is that there probably will not be a post-trip bounce for Francis to build on.
In the past, papal visits have done little to boost Catholic affiliation. . . . Surveys show that papal visits also have not even temporarily stemmed the long-term fall in worship attendance among Catholics.