Poll: Gay Pride Rising Even as Sense of Community Decreases 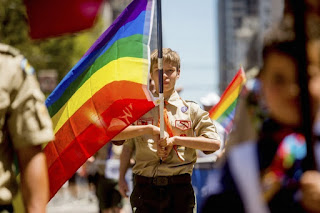 While gays are increasingly "mainstream" - the husband and I are yacht club members, frequent guests at a country club and even in Hampton Roads, Virginia, law firms are now happy to hire attorneys who are openly gay - much anti-gay discrimination continues to exist, especially in red states and backwaters like Southwest Virginia.  A recent poll, however, suggests that some gays are feeling a lost sense of community as society becomes more gay friendly. Personally, I have not felt this phenomenon, perhaps because the husband and I are so active in LGBT organizations such as Equality Virginia, HRBOR, the local gay and gay friendly chamber of commerce, HR Pride and other community organizations.  Nonetheless, as the Washington Post reports, while a sense of "gay pride" seems to be occurring, some poll respondents feel a loss of a sense of community as more gays go mainstream.  Here are article highlights:

In an illuminating and strikingly different survey, Logo — the Viacom Media network aimed at gay audiences — polled 1,061 gay men between ages 18 and 49, asking them how they saw themselves and their communities and following up with smaller groups in a number of cities. The survey is the first in a series of surveys of different LGBT communities that Logo plans to conduct. And it provides a fascinating look at how a rising generation of gay men feels about gay history, the role of the Internet and some of the biggest internal challenges facing gay communities. (An early look at the survey results was provided to The Washington Post.)

No matter its findings, the Logo study is unusual simply in that it exists at all. . . . . it’s only recently that LGBT people have been asked about how they see themselves and the society they live in more generally.

While this first Logo study doesn’t capture the range of experiences of other members of the LGBT community, like lesbians, bisexuals and transgender people, the researchers behind it were able to delve more broadly into the way gay men see themselves and their communities — with some surprising results.

The survey results reflect high and intense levels of pride among the respondents. Sixty-one percent of gay men between ages 20 and 29 told researchers that being gay was either extremely or very important to their identity (those numbers declined somewhat with age). Seventy-five percent of respondents of all ages agreed with the statement “Being gay makes me feel different in a good way.” Three-quarters also said that their sexual orientation had a positive effect on their lives, and 67 percent said that their lives were more interesting because they were gay. And 83 percent said that they found something distinct and important in their friendships with other gay men.

“But at the same time we started to hear expressions of nostalgia from the younger end of the community, that they felt that the gay community of today didn’t feel as united or close-knit as they imagined it once was.”

While younger gay men have no desire to return to eras defined by persecution, police violence and indifference from public officials, and while they benefit from much greater access to one another through the Internet and through smartphones, the survey results did suggest a real longing for gay institutions. Sixty-four percent of the respondents in their 20s and 30s told researchers that “As gay people become more integrated into the mainstream, we have fewer places we can call our own,” and 85 percent of the overall respondents agreed with the statement “It’s sad to see gay neighborhoods and bars disappear,” and also with the idea that even as more Americans become open and accepting to gay people, it’s important to maintain gay-only spaces.

One of the ways these generational differences manifest is in the very process of figuring out how to be gay and what it means to be gay. Sixty-five percent of the survey respondents in their 20s and 30s agreed with the statement “Today the big struggle is no longer coming out but figuring out what kind of gay man do I want to be.”

“One of the interesting things about that is they felt like it was harder for them to take advice from older members of the community because they felt like the experiences they were having today, and the fact that they grew up in such a different environment sort of meant that the advice they had received from their older counterparts wasn’t going to be directly relevant,” Cohen says of the the 79 percent of all respondents who said that younger gay men were creating new rules and ways of gayness . . . .

[T]he process of identity formation is broadly disruptive, political scientist Kenneth Sherrill argues, because despite a profusion of cultural archetypes and the fact that more people are out of the closet, the assumption is still that most children will be heterosexual. When young people realize that they are gay, lesbian, bisexual or transgender, it raises many other questions as well. Sherrill’s research, for example, has found that LGBT children of Republican parents switch party identification at exceptionally high rates. “That shock to the system has political and social consequences,” Sherrill explains. “It puts your identity on the table for reconsideration the moment you consider you’re not the person you thought you were going to be growing up. And when that happens, our research leads us to believe that it puts all aspects of identity on the table for reconsideration.

Eighty percent of respondents described the gay community as very judgmental, and 81 percent called it clique-y. Sixty-five percent of respondents agreed with the statement “Within the gay community, I often feel the pressure to look or act a certain way.” In particular, that judgment can manifest as racism against men of color, heavier or older men or men who don’t present themselves as hyper-masculine.

Cohen and Hillhouse emphasized repeatedly that gay men and the LGBT community at large still face substantial material obstacles to equality. But their research suggests that the wave of attitudinal change that shows up in their survey is just beginning to crest.

I came out in late 2001 and began living as a gay man (although closeted at work) in August, 2002.   Since then, I have seen a decline in the number of local gay clubs and those that have survived tend to market to an increasingly mixed clientele of gays and straights.  That said - at least in larger metropolitan areas - opportunities exist to build a sense of community through LGBT organizations.  In addition, most colleges and universities have active LGBT organiztions. Like many things, finding a sense of community requires effort on one's part to get involved and get to know people.  While more effort may be required today, in my view, it still beatds the "old days" where gays felt compelled to congregate at gay bars and clubs simply because they had nowhere else they could go.

On a last note, I definitely agree with the statement of survey respondents that “Being gay makes me feel different in a good way.”  I did not always feel this way, especially in the early days of my coming out journey, but now I truly feel that being gay is a gift.  A gift that I am thankful for.
Posted by Michael-in-Norfolk at Wednesday, September 23, 2015