Is Marco Rubio an Empty Suit? 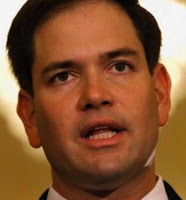 With Rick Perry and Scott Walker having bailed from the GOP clown car, pundits are casting about to discern who the beneficiary or beneficiaries of their exit might be.  Some would name Marco Rubio as the principal beneficiary.  However, given the swamp fever that prevails amongst the GOP base, it takes very little to excite the swarm of cretins, racists and religious extremists that now dominate the GOP base. A piece in Huffington Post under scores why Rubio is an empty suit and unfit of the office of the presidency.  Here are excerpts:

[T]here is little of substance to commend promoting Rubio to president in the political blink of an eye. His policy positions seem to involve positioning himself with the party's right-wing base. Though forcefully delivered, his foreign-policy prescriptions are no more novel than Dick Cheney's: disavow the opening to Cuba and the Iran nuclear deal, pledge allegiance to Benjamin Netanyahu, consider intervening militarily in Syria and Iraq, and bulk up the military to project American power. His anodyne budget proposals include that chestnut of political fantasies, the balanced budget amendment. The current Rubio is so pro-life that he grants no exception to victims of rape or incest.

His switch from believer to climate change denier was augured when he coined the dodge "I'm not a scientist" -- which, given that he is also not a general, an economist, or an educator, if taken literally would seem to limit his role as president to pardoning turkeys and lighting Christmas trees.

The most egregious example of Rubio's evanescence on principles may be his head-spinning about-faces on immigration. Running for the Senate in 2010 he disdained a path to citizenship for illegal immigrants. But by 2013, he became instrumental in a bipartisan group of senators whose comprehensive immigration reform bill included just such a path, underscoring his zeal with impassioned speeches inside and outside the Senate. To his apparent surprise, the Republican base erupted in anger. When his legislation passed the Senate, Rubio did not appear with his colleagues at the press conference that followed. And four months later, he publicly opposed his own bill's passage in the House. These dizzying changes seem particularly soulless in a man who asserts that his parents' immigrant experience is at the core of his political soul.

Equally problematic, Rubio is the poster child for the post-Citizens United systemic distortion which surfaced in 2012: candidates disproportionally financed by wealthy patrons (e.g. Newt Gingrich/Sheldon Abelson; Rick Santorum/Foster Friese). But Rubio's ties to Florida billionaire Norman Braman suggest more than a short-term rental. Once Rubio became a Florida legislator, Braman funded his campaigns, financed his legislative agenda, and subsidized his personal finances, employing Rubio as a lawyer and his wife as a philanthropic advisor. While Speaker of the Florida House, Rubio helped steer $85 million in state funds to Braman's favorite causes. And now Braman is expected to spend at least $10 million to help Rubio become president.

But Rubio is also a leading contender for the largess of Sheldon Adelson, the right-wing ideologue who spent $100 million in the presidential campaign of 2012. In addition to courting Adelson at a half-dozen private meetings during which he laid out his foreign policy vision, this summer Rubio cosponsored the casino mogul's top legislative priority, a bill to outlaw Internet gambling. Lest Braman's and Adelson's interests seem merely parochial, both men vehemently oppose the Iran nuclear deal and criticize the proposed two-state solution between Israel and the Palestinians. For whatever reason, Rubio now espouses both positions, vowing to hamstring implementation of the Iran nuclear pact by rear-guard legislative tactics.

The presidency is serious business -- too serious, one would hope, to entrust to inexperienced candidates with malleable ideas and wealthy patrons whose desires are far from malleable. In more serious times, Rubio would be running for reelection to the Senate or, perhaps, for governor of Florida, hoping to benefit his state while preparing himself for national leadership.

. . . .  Rubio is a political adolescent, still dressed in short pants, dependent on a scholarship funded by powerful benefactors.

Posted by Michael-in-Norfolk at Wednesday, September 23, 2015