Why Hispanics are thanking Donald Trump 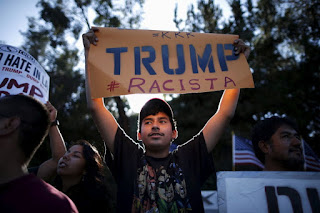 One of the things that Donald Trump's candidacy has helped to further underscore is the blatant racism of much of the Republican Party.  I have pondering only partly in jest as to when the Republican city and county committees will begin their meetings by passing out Klan robes.  Thankfully, Hispanics are coming to realize that the GOP hates them just as much as blacks and gays.  And it is not just Trump who markets this anti-Hispanic message.  With few exceptions, almost all of the GOP 2016 presidential nominee candidates have jumped onto the hate Hispanics band wagon.  As a piece in Politico reports, Hispanic activists see this inflammatory rhetoric as an opportunity to mobilize Hispanic voters in 2016 and repay the animus to the GOP.  Here are article highlights:

Hispanic activists have two words for Donald Trump — thank you.

“I think the greatest thing to ever happen to the Hispanic electorate is a gentleman named Donald Trump, he has crystalized the angst and anger of the Hispanic community,” U.S. Hispanic Chamber of Commerce President & CEO Javier Palomarez told POLITICO in an interview. “I think that we can all rest assured that Hispanics can turn out in record numbers.”

Trump has rankled the Hispanic community from Day One of his presidential run when he called many illegal Mexican immigrants “rapists” and drug peddlers during his rambling announcement speech in June. Since then, he’s driven the GOP field further right on immigration issues, in part with his aggressive proposal to have Mexico pay for a wall along the border with the U.S. and to deport 11.3 million undocumented immigrants in short order.

While many activists find his comments downright offensive, they also see an opportunity. Trump has managed to get Latinos engaged with the 2016 race, and activists plan to exploit that to the fullest extent possible.

“He really is just outrageous, he’s built his entire campaign on attacking our community and really playing to the worst element of American society,” said José Calderón, president of the Hispanic Federation, a nonprofit membership organization. “In some ways, he’s helping us out, the base is energized —I think people are really eager to stand up and say this is not who we are and show that through our electoral process.”

Calderón said in nonelection years, the Federation, which represents 100 community-based organizations across the country and is leading voter outreach efforts, can register about 25,000 Hispanics and on election years it’s about 60,000. But with Trump’s comments driving people to the polls, Calderón believes they can register even more.

“It’s become easier, right, to do it now. The community is very mobilized, there is this anger,” Calderón said. “We will respond in kind, through our votes.”

For the 2016 race, the organization has partnered with 20 member organizations across the U.S. in order to increase direct contact with Hispanic communities. Calderón expects to triple previous outreach in this coming cycle, bringing it to 600,000.

Efforts are going to really crank up on Tuesday, when the White House will make Voto Latino’s “Voter Registration Day” official. The nonpartisan organization, along with 2,000 partners across the country, plans to increase outreach through social media, door-to-door canvassing, tabling and online campaigns to encourage everyone — not just Hispanics — to vote.

But while Trump has proclaimed "the Hispanics love me," he will not likely be the beneficiary of any big Hispanic voter turnout, with the Marist poll showing that Jeb Bush and Marco Rubio with the most positive sentiment.

Increasing voter turnout in the Hispanic community has been a consistent challenge for activists. While the number of eligible voters continues to swell (the Pew Research Center told POLITICO it goes up 3 million to 3.5 million between every presidential election), the rate doesn’t necessarily match the increase.

Interviews with multiple Hispanic groups show they’re stepping up outreach to their base.  “It’s something that we’re taking very personally,” said Voto Latino President and CEO Maria Teresa Kumar. “We can’t sit by the sidelines and there is no clearer way than to demonstrate to our fellow Americans that we’re Americans than by participating.”

The group, which largely focuses on millennials, has concerts and other events on college campuses planned thoughout the month and announced a partnership with Instagram called the #HispanicHeritageHero campaign. The goal is for people to post their Hispanic heroes on Instagram using the hashtag and then pledge to vote in their honor, Kumar said.

Hispanic celebrities also are joining the cause. Comedian George Lopez and singer Lila Downs will have voter registration at each stop on their tours as part of the campaign.

Many organizers say there's a precedent for the Trump effect they're currently seeing, pointing to Proposition 187 in California in 1994. The ballot initiative, which was supported by Pete Wilson, the Republican governor at that time, would have kept illegal immigrants from attending public school and medical care. Although the proposition was approved (it was ultimately thrown out by the court), Hispanics turned out in droves and many credit the initiative with turning the state blue.

The Trump camp is not worried, and it says it sees more Hispanic voters as a good thing.
“I don’t hear any empirical evidence that that is going to happen,” campaign manager Corey Lewandowski said about the idea that more Hispanic voters could hurt his chances. “The more people that take part in the election process, the better, and I think it’s clear that Mr. Trump has invigorated people who aren’t traditionally participating in the process.” . . . .  “I think this is great, poll after poll continue to show that Hispanics are supporting Mr. Trump at a disproportionate rate to any of the other candidates.”

Hispanic activists don't agree. Henry R. Muñoz III, co-founder of the Latino Victory Fund, thinks Trump’s rhetoric is not just problematic for Trump, but for the other GOP candidates, too.

While other candidates have not come close to matching Trump's incendiary comments about immigrants, some have stumbled when talking about Hispanics. For example, On Thursday, in what appeared to be a convoluted attempt to thank the Latino community, Ohio Gov. John Kasich associated them with a hotel maid he talked to when he needed soap.

Here in Virginia and elsewhere, the constant attacks and demonizing of gays helped increase LGBT voter turn out and drove much of the community to the Democrat camp.  I hope that the same happens on a nationwide scale with Hispanics.  Parties that demonize others and play to bigotry need to be defeated at the polls on election day.  Today's GOP needs to become a permanent minority party.