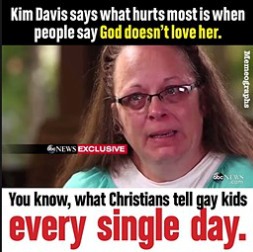 Kim Davis, the renegade anti-gay Rown County, Kentucky clerk - who candidly, I see as a bloviating serial adulterer cow - has taken to the airwaves via ABC News and its affiliated shows in an apparent effort to garner sympathy for her defiance of numerous federal court orders.  Stripped of all else, Davis appears to be a self-centered person who is psychologically and emotionally damaged (morally challenged to boot) who has grasped onto fundamentalist Christian as a means to find some shred of self-respect.  In many ways, Davis is a victim much like the "ex-gays for pay" who are total losers in life who have blamed their problems on their homosexuality rather than their own bad choices and bad conduct.   I for one have ZERO sympathy for Davis and believe that tawdry whores have more virtue and integrity than Davis.  The ultimate irony, however, is that Davis is either oblivious to or indifferent to the harm she and her "godly Christian" friends shower on LGBT Americans virtually every day.  My gay activist/blogger friend John Becker summed it up well in a Facebook post:


Awwwww, Kimmy, it hurts your widdle feelings when someone tells you that God doesn't love you and isn't happy with you?

That's rich -- because that's exactly what "Christians" like you tell people who are lesbian, gay, bisexual, and transgender. Constantly. Religion-based bigotry is exactly why so many LGBT people are driven to anxiety, depression, and suicide, and why so many LGBT kids are kicked out of their homes (a whopping 40% of homeless youth are LGBT-identified).

The religion-based bigotry you're breaking the law to defend is literally killing us, but we're supposed to feel sorry for *you*... because your feelings are hurt? PUKE.

As disgusting as Davis may be, even worse are the parasites of the professional Christian crowd who are using Davis to line their own pockets and subsidize the plush lifestyles they lead by peddling hatred.    I can honestly say, that with every passing day the contempt that I hold for "Christians" like Davis is growing.  They are poor excuses for human beings.
Posted by Michael-in-Norfolk at Tuesday, September 22, 2015