Will the GOP's Demagoguery Come Back to Haunt It? 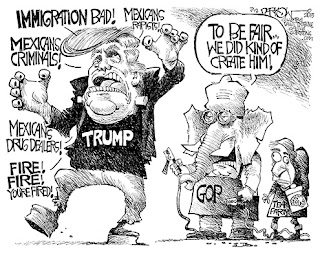 I realize that in a political primary one must court the party base, especially in states where one registers by party affiliation - Virginia does not have such registration - but some where along the line there needs to be some remote consciousness that what is said in the primary contest will come back to haunt in the general election.  Today's GOP has forgotten this simple rule of politics.  Instead, demagoguery runs rampant and as the 2016 GOP presidential nomination contestants prostitute themselves in the foulest of ways to the Christofascist and white supremacist elements of the party base (increasingly, these elements appear to be one and the same).   As I have noted over and over again, the GOP establishment created a Frankenstein monster when it cynically welcomed Christofascists into the party for the purpose of short term electoral gains.  Now, that monster has broken loose and seemingly cannot be killed. Rather than trying to kill the monster r at lease rein it in, now the GOP candidates have joined in its rampage.  As a piece in the Washington Post takes note, this may come back to truly haunt the GOP.  Here are highlights:

[Some] Republicans worry that the image of these early months will last. “This year is different, and what is happening now is leaving a searing impression,” said Peter Wehner, who headed the White House Office of Strategic Initiatives under President George W. Bush. “This is toxic for the Republican Party — potentially lethal for it.”

The leading candidates, Wehner added, are “sending a message in bright, Trump-like lights to nonwhite voters that they are not welcome.”

In 2012, the GOP alienated Latino voters when nominee Mitt Romney said he favored “self-deportation,” the idea of making life so difficult for illegal immigrants that they would leave on their own. Romney got 27 percent of the Hispanic vote, a dismal showing compared with the 44 percent Bush received in 2004.


But today, some candidates are talking about far harsher immigration measures. Trump has said he would forcibly deport the estimated 11 million people who are in the country illegally, and a number of GOP contenders have spoken in favor of ending the constitutional provision granting citizenship to anyone who is born in this country.

Some Republicans have lamented much of this year’s inflammatory rhetoric as selective, politically expedient readings of the Constitution.

“We often use the Constitution the way we do the Bible. We treat it like a buffet line. We take what we like, and we leave the rest behind,” said former Oklahoma congressman J.C. Watts, who supports Sen. Rand Paul (Ky.) for the Republican nomination.

Others decry what they say are assaults on religious liberty with respect to those whose beliefs run counter to the Supreme Court’s recent decision legalizing same-sex marriage. Yet some of the same GOP figures would disregard the fact that the Constitution does not allow a religious test of people who run for president.

[T]he chief dynamic that has driven the fight for the nomination is a current of anger in the GOP base, aimed at what many see as unsettling cultural and political changes and a party establishment that they believe has failed them.

“Many in the GOP have gotten more and more angry during the Obama years, and the conservative media environment has gotten more shrill and less reasonable,” said Matthew Dowd, a top strategist in Bush’s 2004 reelection campaign. “In addition, conservatives have seen more of their traditional institutions under attack, and their version of America going away.”

That was the view expressed Tuesday by Ruth Hunsberger of Urbana, Ohio, after Carson’s rally in Cedarville: “How could it come to the point that people would turn their backs on Christians? Everything has eroded so badly. And it has just come so quickly.”

After Romney’s loss in 2012, the Republican establishment responded by changing the mechanics of how it picks a nominee, including fewer debates and a more compressed calendar of primaries and caucuses.

But GOP leaders did little to address the rage that was roiling their base and that had fueled the rise of anti-establishment forces such as the tea party movement.
“They didn’t deal with the fundamental problem, which was their voters,” Dowd said. “They picked process over people.”

My response to Ms.Hunsbergerof Urbana, Ohio, as to why people would turn their backs on Christians is simple: conservative Christians have made it very clear that they are selfish, hate-filled people who want to trample on the rights of others.  Perhaps she needs to take a good look at herself in the mirror and do some serious self-examination.
Posted by Michael-in-Norfolk at Wednesday, September 23, 2015