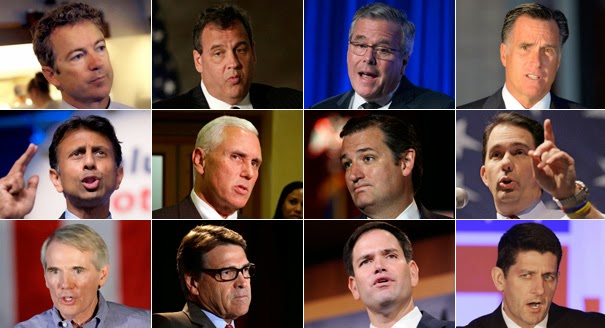 I continually bemoan the state of today's Republican Party where ignorance is embraced and celebrated and where ideological purity trumps objective reality be it in economic matters or the on going denial that climate change is a real phenomenon.   The problem is exacerbated by the growing extremism and ignorance of the party base - in good measure due to the rising of the Christofascists who are mutually exclusive of logic, reason, and intellectual curiosity - and the party primary process which forces the best candidates from campaign contests since the base only votes for know nothings and extremists be they religious extremists or white supremacists who merely don't wear KKK robes in public.  A column in the New York Times looks at the shrinking intellectual integrity in the GOP.  Here are excerpts:

The 2016 campaign should be almost entirely about issues. The parties are far apart on everything from the environment to fiscal policy to health care, and history tells us that what politicians say during a campaign is a good guide to how they will govern.

Nonetheless, many in the news media will try to make the campaign about personalities and character instead. And character isn’t totally irrelevant. . . . . But the character trait that will matter most isn’t one the press likes to focus on. In fact, it’s actively discouraged.

You see, you shouldn’t care whether a candidate is someone you’d like to have a beer with. Nor should you care about politicians’ sex lives, or even their spending habits unless they involve clear corruption. No, what you should really look for, in a world that keeps throwing nasty surprises at us, is intellectual integrity: the willingness to face facts even if they’re at odds with one’s preconceptions, the willingness to admit mistakes and change course.

As Franklin Roosevelt put it in a celebrated speech, “The country demands bold, persistent experimentation. It is common sense to take a method and try it: If it fails, admit it frankly and try another. But above all, try something.”


What we see instead in many public figures is, however, the behavior George Orwell described in one of his essays: “Believing things which we know to be untrue, and then, when we are finally proved wrong, impudently twisting the facts so as to show that we were right.” Did I predict runaway inflation that never arrived? Well, the government is cooking the books, and besides, I never said what I said.

So what’s the state of intellectual integrity at this point in the election cycle? Pretty bad, at least on the Republican side of the field.
Jeb Bush, for example, has declared that “I’m my own man” on foreign policy, but the list of advisers circulated by his aides included the likes of Paul Wolfowitz, who predicted that Iraqis would welcome us as liberators, and shows no signs of having learned from the blood bath that actually took place.

Meanwhile, as far as I can tell no important Republican figure has admitted that none of the terrible consequences that were supposed to follow health reform — mass cancellation of existing policies, soaring premiums, job destruction — has actually happened.

The point is that we’re not just talking about being wrong on specific policy questions. We’re talking about never admitting error, and never revising one’s views. Never being able to say that you were wrong is a serious character flaw even if the consequences of that refusal to admit error fall only on a few people. But moral cowardice should be outright disqualifying in anyone seeking high office.

We really, really don’t want the job of responding to that crisis dictated by someone who still can’t bring himself to admit that invading Iraq was a disaster but health reform wasn’t.


I still think this election should turn almost entirely on the issues. But if we must talk about character, let’s talk about what matters, namely intellectual integrity.