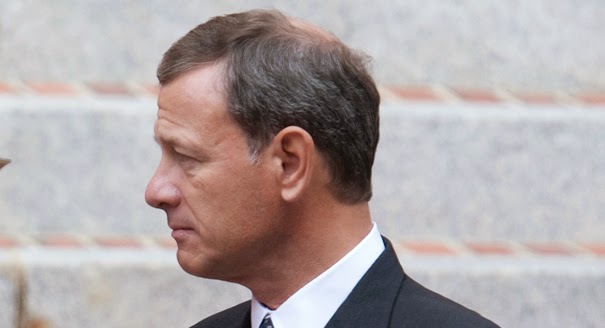 Numerous posts before have speculated at the possible vote by Chief Justice John Roberts on the issue of gay marriage.  Today in oral argument before the U.S. Supreme Court we may get more hints of what Roberts may decide to do with the issue.  Roberts does seem to have a high level of vanity, but unlike Scalia who cares nothing about how he will be viewed by history, he seems to have his eye on the long picture and where he will fit in history.  A column in the New York Times looks at why Roberts might vote to strike down same sex marriage bans nationwide to the consternation of the Christofascists.  Here are excerpts:

ON Tuesday, when advocates press the United States Supreme Court for a nationwide right to marry for same-sex couples, they and their supporters will have reason to be optimistic. Since the court decided United States v. Windsor in 2013, a vast majority of state and lower federal courts — not to mention the wider public — have embraced the overwhelming moral, logical and evidentiary case for the freedom to marry.

In Windsor . . . . Roberts dissented, but he focused primarily on procedural issues — leading some observers, like the Slate writer Mark Joseph Stern, to speculate that he could come around this time.

Others have wondered whether Chief Justice Roberts was instrumental in the Supreme Court’s decision last year to not review appeals of lower court rulings upholding the right of same-sex couples to marry.

It takes only four votes to grant review, and, according to this theory, if the three more right-leaning justices (Samuel A. Alito Jr., Antonin Scalia and Clarence Thomas) were ready to consider those cases, they apparently lacked Chief Justice Roberts’s vote. But these votes are done in secret, so one can only speculate.

[T]here are a number of institutional reasons Chief Justice Roberts might, and should, cast a vote for the freedom to marry.

First, a Supreme Court ruling authorizing the states to restrict marriage to heterosexual couples would lead to enormous confusion. The court’s decision not to take appeals of earlier cases, or put other appeals of lower court decisions on hold, has induced many couples to marry. . . . . The consequences of such a ruling would be dramatic — and quite unsettling. Administrative agencies would have to shift policies (again), create new forms (again), and educate their bureaucracies on a variety of matters — all of which could be undone by a new legislative act or state constitutional amendment. Given the sheer number of economic rights, presumptions and obligations that travel under the “marriage” heading, denying gay couples access to a uniform institution, with all the complications, headaches and (possibly) litigation it could bring, seems like the antithesis of restraint.

Then there is the broader issue of social consensus. The continuing nationwide division over same-sex marriage, notwithstanding the recent shift in public opinion, might give Chief Justice Roberts pause.

Since the 2013 Windsor ruling, four federal appellate courts and more than 30 federal trial judges have issued pro-marriage rulings for same-sex couples. (By contrast, only one federal appellate court — the Sixth Circuit, based in Cincinnati — and a handful of federal trial judges have ruled against same-sex couples.) These judges reflect a broad array of appointees by Republican and Democratic presidents alike. Does Chief Justice Roberts truly believe that so many of his lower-court colleagues have gotten the law wrong? Possibly — but the growing consensus on the ground could nudge him to side with a vast majority of his colleagues on the federal bench.

[T]he court may decide that a uniform rule favoring same-sex couples would be the more prudent and moderate outcome.

In short, the posture of these cases, their significance in the broader history of the Supreme Court, and their administrative and practical implications are likely to give the chief justice pause before voting against the right to marry. If Chief Justice Roberts focuses on these questions, his vote should be with the plaintiffs this time around.

First, notoriously John Roberts calls balls and strikes the same way that a referee in a World Wide Wrestling match calls fouls. As things stand now, to the extent that he goes down in history at all, he will go down as Chief Justice of a Supreme Court that has devoted itself to reversing a half-century of voting rights and to enabling moneyed interests to take control of the courts and the election system. He is clearly motivated not as much by law and precedent, both of which he is willing to contort and/or concoct, as he is by ideology, theology, and his personal agenda, he presumably does not want to be compared, unfavorably, to Roger Taney by also being known as the chief justice who stripped access to health care from tens of millions of Americans. So it could be plausible for him to decide to muddy the waters as to his disdain for the rights of human Americans by not massively opposing marriage equality.

Purely speculation on my part, of course. Although based on his past decisions, I wouldn't trust him around teen-age girls, and it would be interesting to know where and how he has his money invested.

From the rumors I have heard, it is more likely teenage boys he cannot be trusted around. :)