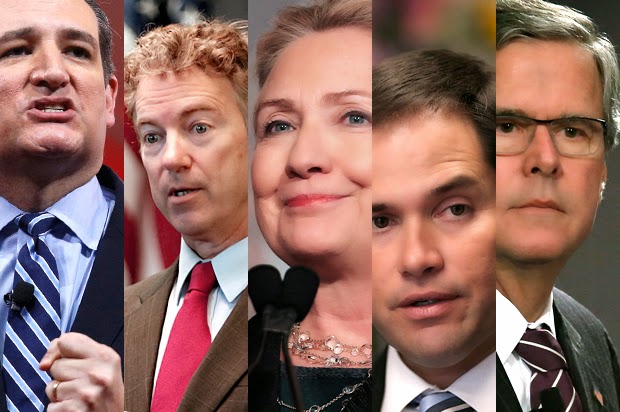 I continue to believe that long term the Christofascists will be the death of the Republican Party.  Despite surging public support for gay rights and gay marriage, the knuckle dragging Bible thumpers continue to demand that gays be demonized and subjected to discrimination at will all now under the banner of "religious freedom."  As noted in a post yesterday, public support for such license to discriminate laws is dropping and corporate America is decidedly against them.  Yet most Republican elected officials continue to prostitute themselves to the "godly folk" who increasingly are demonstrating just how nasty they are in fact and driving away the younger generations from religion entirely.  A somewhat satirical column in the New York Times looks at the increasing contortions the GOP faces as it tries to remain the party of political whores of the Christofascists while not alienating everyone else.  Here are highlights:

Republicans find ourselves in a bind, caught between the Bible Belt and a need for fresh accessorizing, between Mississippi and modernity, with evangelicals over here and millennials and soccer moms over there. We have a primary process that won’t graduate anyone who loves the gays too much but a general election that could, for the first time, punish anyone who loves the gays too little.

And so we must calibrate. Triangulate. Pink triangulation, let’s call it.

This is our mission, manifest in semantic loop-de-loops and oratorical gobbledygook from candidates like Scott Walker, who recently reminisced about an unnamed relative’s same-sex nuptials. Observe how he handled that: by making clear that he didn’t go to the ceremony, only to the reception. That’s called having your wedding cake (presumably from a baker with no religious objections) and eating it, too. Also note Ted Cruz. Out of one corner of his routinely scowling mouth, he speaks of a “jihad” by the gays to force even stern Christians like him to endorse same-sex marriage. Out of the other, he says that if one of his daughters came out as a lesbian, no worries!

[T]he gay issue poses real peril for the party. And that’s not so much because a recent survey found that as many as 60 percent of Americans now support same-sex marriage. Most of those Americans don’t vote for a candidate based on his or her position on two men or two women tying the knot. Gay marriage isn’t their first priority and possibly not even their fifth.


But Americans have rallied around the gays to a point where beating up on them just looks crotchety and mean, the precise qualities that we are trying to move the party’s image past. When some Americans in their 20s say that they would never vote for us, it is not because they dislike us on the small-government or limited-regulation fronts. It is not because they think Democrats are better stewards of the economy. It is not about abortion.

It is about the gays. These Americans grew up with the gays among their favorite television characters and with the gays in the house across the street (the one painted in the neighborhood’s most tasteful color). They had beloved teachers whom they knew to be lesbian. They hang with openly lesbian and gay relatives and best friends. They simply don’t understand discrimination against the gays. And anyone who condones it seems to them callous and hopelessly out of touch, which is why our Grand Old Party needs a measure of Gay Young Party. Maybe two heaping tablespoons. Perhaps even three-quarters of a cup.

We do not recommend the tint picked by Bobby Jindal, who just tripled down on his opposition to gay marriage while casting big business — corporate America — as a principal enemy of righteousness on this front. Earth to Bobby!?! We are big business. Big business is our cuddling partner. We spoon with it. We do not vilify it. Bobby is a desperate man, trying to find a point of entry into a crowded primary field with no room for him. Tune him out, and do not, under any circumstances, follow his lead.

Better to mimic Chris Christie. He’s been dealing with this issue longer than most, because they love the gays in New Jersey. And he has mastered the roll-over-and-play-dead approach, wanly voicing personal qualms about gay marriage while stating on occasion that such resistance is futile. He does pro-gay stuff around the edges of same-sex marriage, so that his message to the gays is this: no filet mignon for you, but how about some tasty veggie and starch sides? I can offer you a crackdown on bullying. Watch me sign a ban on conversion therapy.

YOU can also learn from Marco Rubio, a portrait of the candidate as contortionist. He has said, defiantly, that “supporting the definition of marriage as one man and one woman is not anti-gay, it is pro-traditional marriage.” But he has also said, more recently, that he’d go to a friend’s gay wedding in a festive heartbeat, and that he sees homosexuality as ingrained in most cases, not a choice. By asserting that states should ultimately decide on gay marriage, he has elevated local control above personal conviction and thus surrendered to gay nuptials — sort of — without actually signing off on them. This particular fudge will become more difficult if the Supreme Court makes same-sex marriage the law of the entire land, but Marco has a better chance of squaring that circle than Rand Paul does.

Jeb Bush’s tack is more comprehensible. He utters much of what religious conservatives want to hear. But he also brings enough gays or Republicans who support same-sex marriage into his campaign to give Americans a signal of where so many of us in the party really are. We have gay children, grandchildren, siblings, nieces, nephews, colleagues, bosses, employees. We want the world for them and a world that’s fully open to them.

But we also want to win elections, and our coalition is what it is. So we frequently take stands and mutter sentiments that leave them on the side of the road to 1600 Pennsylvania Avenue.

But for the serious issues involved, it may be almost comical to watch the posturing and sputtering that will follow a Supreme Court ruling striking down all state same sex marriage bans.   I suspect many Republicans will welcome such a ruling because it may begin to push the Christofascists into the political  fringes where they belong.


Note: the smiling image of Hillary above is appropriate since she's likely thanking God that Democrats have gotten on board with the new reality of same sex marriage.