Putin is Trapped by His Strident Anti-Western Rhetoric 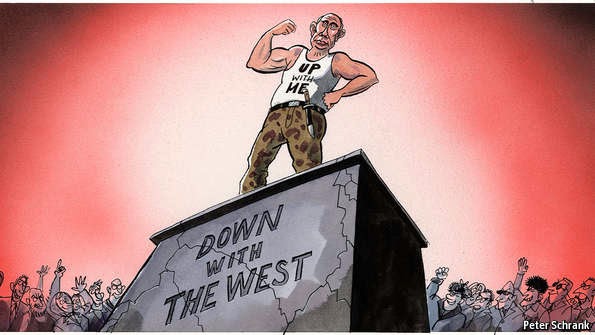 As an article in The Economist notes, Vladimir "Adolph Hitler Want to Be" Putin has put himself in a bit of a boxed in situation.  He has made endless strident attacks on western nations as he tries to divert the attention of average Russians from his failed economic policies which have allowed his cronies to rape the Russian people.  Yet increased bellicose behavior could lead to war and Russia is not in an economic position for such an ill-advised adventure.  If Putin likes to see himself as a modern day Tsar, he needs to remember what war brought down on Nicholas II when Russia faced an economically far superior foe, i.e. Germany.  Here are excerpts that look at how Putin may have outsmarted himself:

A RELATIVE hiatus in the fighting in eastern Ukraine (at least until this week) and a relative stabilisation in the Russian economy are prompting two questions. Is the worst of the war over and might better economic news calm the Kremlin—or is this a lull before a new storm?

The economic situation is not as bad as many predicted four months ago. Having lost half its value, the rouble has stabilised and even started to strengthen, thanks in part to a recent rise in oil prices. Inflation is running at 17% but is rising more slowly than many feared. Instead of a 5% contraction, the economy may shrink by only 3% this year. “The situation is not as catastrophic as many people thought,” is how a senior Russia banker sums up the mood.

Yet the fragile economic balance is not being used by Vladimir Putin as an argument for returning to peace and prosperity, but rather as evidence that he is standing strong against Russia’s adversaries. The state media have trumpeted the strengthening of the rouble against the dollar and the euro as a victory in the face of American and European enemies determined to ruin Russia.

The Kremlin’s narrative of war has long moved beyond Ukraine to the West in general. The claim that their country is at war may be news to Americans, but it has been drilled into the minds of many ordinary Russians. The prospect of a war with the West is now a big concern for public opinion. Some 81% of the population sees America as a threat, the highest proportion since the Soviet Union fell apart.

According to this narrative, Russia is under attack on all fronts—economic, ideological, Middle Eastern, European—and must respond accordingly.
In this world of mirror images, America serves as Russia’s reflection and alter ego. It ascribes to America its own actions: incitement of violence in Kiev, support of extreme nationalists in eastern Ukraine, military involvement in the conflict.

What are Russia’s motives and goals in this confrontation, and is it now trapped in a spiral of aggression? Russian officials talk obsessively of geopolitics, but the answers depend not on what the West does but on how the Kremlin calculates its risks at home, since staying in power is its main goal. A study commissioned by Alexei Kudrin, a former finance minister, and conducted by a group of Russian sociologists led by Mikhail Dmitriev of the New Economic Growth, a think-tank, suggests that the roots of Mr Putin’s actions in Ukraine lie in the Kremlin’s need to solidify its legitimacy after the growing discontent that erupted into street protests during the winter of 2011-12.

Those protests were driven mainly by Russia’s middle class, frustrated by its lack of prospects. After a decade of rapid income growth that boosted living standards, priorities shifted to such aspirations as better justice, education and health care that Mr Putin’s regime of crony state capitalism could not provide. . . . . The protests in Russia’s larger cities started to resonate with economic and social discontent in poorer provinces, and risked erupting into an open social conflict.

Russia’s annexation of Crimea arrested this trend. Alexei Navalny, a leader of the protests of 2011-12 who memorably named Mr Putin’s United Russia a party of crooks and thieves, says that the president has hijacked the political agenda by substituting imperial nationalism for building a modern state.

The Kremlin can ill afford a real military clash with the West, but it will claim any signs of Western weakness as victories. To demonstrate its strength, it is brandishing its nuclear arms and flexing its muscles all around NATO’s borders. Dmitri Trenin of the Carnegie Moscow Centre, a think-tank, says Mr Putin wants his nuclear threats taken seriously, and adds that the risk of nuclear war is greater than at any time since the 1962 Cuban missile crisis. But the immediate goal of such intimidation is to persuade the West to drop sanctions, which would be presented at home as a huge victory.

Against this background a resolution of the Ukrainian crisis and de-escalation of tensions with the West would push the focus back onto economic and social problems, lowering Mr Putin’s ratings, just as happened after Russia’s war in Georgia in 2008. A continuation of the war in Ukraine and the stand-off with the West will keep his ratings up for longer. But while this may benefit Mr Putin, it risks leaving Russia isolated and economically stagnant.

Russia’s budget cuts are a good guide to Mr Putin’s priorities. The upkeep of the Kremlin and spending on the army and security services take 40% of the entire budget. But spending on health care and infrastructure has been reduced twice as much as spending on defence. Among other winners in the budget are the state media which spew out hatred and aggression.

[T]the mood could one day switch from an external enemy back to Mr Putin himself, not least because the image of America constructed by the Kremlin’s propaganda bears such a close resemblance to the reality of Russia.

The best thing for Russia would be the over throw of Putin - of an assassin's bullet providing the same end result.  The man is a menace and the Russian people need to remove him one way or another.  The ruin that Hitler brought to Germany could be like that which Putin could bring to Russia.  The Russian people deserve much better than that.
Posted by Michael-in-Norfolk at Monday, April 27, 2015