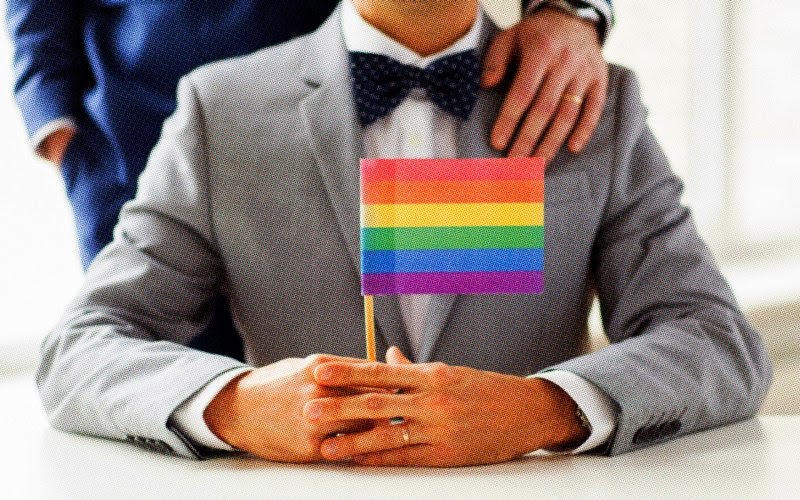 Nothing shakes up a sane, rational family's approach to gays and gay rights issues more than having a family member come out of the closet.  Note, I prefaced my statement with the words "sane and rational" which by definition excludes Christofascists, far too many of whom react by merely disowning their family member.   But those not totally obsessed with Bronze Age myths and fairy tales more often than not find themselves suddenly having to reevaluate old prejudices and beliefs.  A case in point is what is likely happening in the family of Sean Buckley, grandson of William F. Buckley, Jr., viewed by many as a founder of modern conservatism.  In a piece in The Daily Beast young Buckley makes the conservative case for marriage equality.  In addition, he relates the anguish and self-hate that many of us raised in religious homes suffer as a result of religious based ignorance and bigotry.  Here are article highlights:

If you had asked me a few years ago if I supported the freedom to marry, I’d have been one of many young Republicans at the time who’d have given you an unequivocal “no.”

But I began to reexamine my views after acknowledging a part of myself that I’d suppressed for years—I am gay.

My family is loving and compassionate but they have been active in the fight to keep marriage limited to heterosexual couples. Because of their influence and the views expressed by so many in my religious community, I grew up with an extremely negative view of gay people.

I was taught a “hate the sin, love the sinner” approach to moral issues while always being told to respect those with whom I disagreed. But given that you can’t separate yourself from who you love, teaching someone to hate their sexual orientation inadvertently teaches them to hate themselves. For me, this led to an intense self-hatred and a reflexive rejection of anyone that resembled the part of me I was so desperately trying to fight.

A clear majority of Americans now understand that being gay is not a choice. Gradually, this understanding is also extending among conservatives. And over 60% of millennial evangelical youth now support the freedom to marry.

It was not until the dawn of the Enlightenment in the 18th century that the idea of marrying primarily for love arrived. Those who opposed this shift saw it as an affront to social order, and rejected it as a dangerous change in the definition of marriage—similar to the arguments today.

But we’ve evolved, and learned that marriage matters for other reasons. At its core the institution of marriage hinges on two individuals committing to one another in life, for life, on a bedrock of love and self-sacrifice, which results in a better environment for raising children.

Above all else, the greatest gift our parents can give us is to teach us how to love—an emotion that gives the human experience both the purpose and meaning that is so critical to a happy and healthy life. I count this as one of the greatest gifts my parents have given me, and hope to one day give the same to my kids. Conservatives are right to argue that the best environment to raise children is within a marriage. However, it has nothing to do with the gender of their parents but instead the love they have for one another.

[G]ranting the freedom to marry to all loving couples is not a shift from the central tenet of marriage, but instead a fulfillment of its most basic ideals.

Gay couples today are building families and raising children. If we as conservatives care about preserving marriage and family, we must include gay people in the equation.

I believe that individuals have the power and ability to make decisions for themselves better than any government can. For conservatives who likely agree, I ask: why does this suddenly change when it comes to whom one loves and chooses to marry? This is a fight specific to the LGBT community, but it is also a fight for the rights of individual self-determination—a cause conservatives should always be ready and willing to fight for.

As the Supreme Court prepares to consider whether all loving couples should have the freedom to marry, it is time for conservatives to recognize that just as individual liberty should not depend on a person’s gender or race, it should not depend on whom a person loves, either.