Will Hispanics Reject the GOP Again? 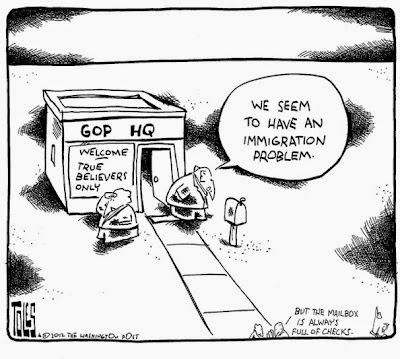 With the Republican effort to turn out the Christofascist vote about maxed out as that demographic continues to dwindle in numbers, the ongoing question is whether or not the G not to mention GOP support for trigger happy copsOP can attract enough other voters to win the White House in 2016.  With younger voters and more educated voters turned off by the GOP's anti-gay jihad, blacks alienated by GOP backed voter ID laws aimed at disenfranchising minorities, many Muslims and Hindu's repulsed by the GOP's self prostitution to the Christofascist, the remaining voting block the GOP has to mine for votes is Hispanics.  Yet even here, the GOP anti-immigrant stance and the very much alive embrace of white supremacists by the GOP, does not bode well for Republicans.  A piece in Politico looks at the odds of Hispanics rejecting the GOP yet again in 2016.  Here are highlights:


This is the week where the Republican party's biggest 2016 challenge takes center stage for the first time. You can’t say Republicans haven't seen it coming. They’ve known for ages that Hispanics have the capacity to make or break them in 2016. Right now it’s looking more like break, unless a couple of potential saviors pull off a miracle—which is why former Gov. Jeb Bush went on Tuesday to Puerto Rico, not known for its early primary status.

If the GOP is to make any headway with Hispanic voters, analysts across the spectrum say two Floridians are the key. Sen. Marco Rubio, a Cuban-American, is enjoying a surge of attention and polling popularity after announcing his candidacy this month. Bush is not Hispanic, despite his “oops” moment of checking off Hispanic on a voter form, but he may be an even better bet than Rubio.

Yet the primary and general election seasons are riddled with political traps—some Republicans set for themselves, some laid by President Obama—that could well make gains with Hispanic voters in the 2016 cycle more difficult than ever.

The problem began with GOP recalcitrance on immigration reform, despite pleas from party elders after the 2012 election to get behind comprehensive fixes that included legal status and a complicated path to citizenship for many of the 11 million illegal immigrants in the country. From there, the dominoes fell. The House killed a bipartisan Senate reform bill. Obama responded with a series of executive actions designed to shield millions from deportation. Republicans and conservatives filed lawsuits to stop him. Courts blocked Obama’s actions. Republicans, having backed off comprehensive reform, narrowed their focus to border control and decrying Obama’s executive “overreach.”

Given that history, get ready for a year or more of questions to GOP White House hopefuls about what they would do about all this as president: Revoke permits for undocumented young people—the “dreamers”—who already have temporary legal status under a 2012 Obama policy? Roll back the executive actions now being challenged in court, even if they eventually take effect and millions receive temporary residency permits?

And that’s just immigration. The GOP is also out of step with Hispanics on major Obama initiatives such as the Affordable Care Act and re-establishing relations with Cuba, as well as broader questions about the role of government. The chasms will put identity politics—as well as campaign skills, personal connections and policy creativity—to a stiff test.

Yet citizenship and other shared immigration goals have receded and new wedges have emerged, raising the question of whether even a Bush or a Rubio can repair relations.  “The idea that Republicans can rip into illegal immigrants without antagonizing Hispanic voters is delusional.”

That sums up why Texas Sen. Ted Cruz, though his father was born in Cuba, doesn’t qualify as a party-expander. He’s a ferocious critic of a path to citizenship and Obama’s executive actions and he opposed Loretta Lynch’s nomination as attorney general because she supported “the president’s illegal and unconstitutional executive amnesty.” . . . . When Cruz entered the race, the DREAM Action Coalition, which represents undocumented young people, predicted that “he may be the most anti-immigration candidate on stage” during GOP primary debates.