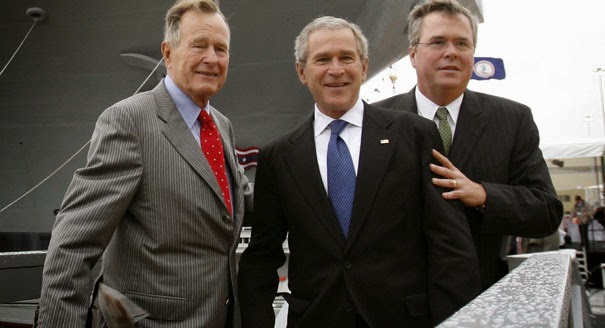 The right wing slime machine has had near orgasms and provided breathless reports about the Clinton Foundation accepting donations from billionaires and foreigners.  As past posts have noted, despite all of the hoopla and hysteria, no "smoking gun" of wrong doing has been revealed.  What the right wing media is ignoring is the fact that the Bush Foundations have likewise accepted money from big donors and even foreign governments no doubt seeking influence.  Occupy Democrats notes in part as follows:

As the conservative media networks drive themselves into a muckraking feeding frenzy over the prospect of the upcoming work of fiction titled Clinton Cash, written by a professional right-wing conspiracy theorist and political hitman, the rest of America has picked up the question of foundation accountability out of curiosity and the tempting allure of scandal. But, in one of the countless hypocritical reversals that are all too common in modern American politics, it turns out that the Bush family foundations have been acting like they have something to hide, while the Clintons have publicly released key information about all their donors, such as identity and approximate amount donated. In typical Republican fashion, they are projecting their own corruption onto Democrats and accusing the transparent Clinton Foundation of accepting the same kinds of secret bribes that the Bush Foundation has been taking for years.

Nonprofits are not obligated to reveal their sources, but the Clinton Foundation has been revealing their donors since 2008, ever since Hillary Clinton became Secretary of State, to avoid the very allegations her campaign is now being falsely smeared with. Foreign governments could have donated to her foundation in secret, as the  fictitious propaganda writer Peter Schweizer has alleged- but the donor list, made public in a searchable database, reveals that the foundation is clean. Tom Watson of Forbes even wrote that “in truth, the Clinton Foundation is among the most forthcoming of major charities and nonprofit foundations—especially those headed by public figures.”

On the other hand, the George Bush Foundation raised $361.8 million dollars between 2010-2013 with no attempt at accountability or transparency.

David Corn of Mother Jones puts it in perspective: “Anyone who wanted to gain favor with the Bush clan while George W. Bush was president could have anonymously donated an unlimited amount of money to his father’s foundation, and now that Jeb Bush is in the hunt, anyone looking to fashion a relationship with the Bushes can contribute millions to either of these Bush foundations and keep that connection a secret.”


Similarly, the George Bush Presidential Library has assets of $47 million and receives $3 million a year from undisclosed donations, functioning as yet another vehicle to funnel campaign and influence money through with no record or transparency, and was accepting donations all throughout George W. Bush’s presidency- another way for the millionaires of America to buy power and favors while trampling over the American democracy.


It’s worth repeating; the Clinton Foundation publicly releases the names of every donor and the amount of each donation, while the Bush Foundations accepted secret, anonymous donations of undisclosed quantities.

Here are a few highlights of what the Dallas Morning News discovered about Bush Foundation donations:

Meredith McGehee, policy director for the Campaign Legal Center watchdog group, said the biggest issues are presidents raising money in office and the “pitfalls of access, influence and conflict of interest.”

Unlike political campaigns, presidential library fundraisers can take foreign donations. Kuwait and the United Arab Emirates, for instance, each gave the Bush Center $1 million or more after Bush left office.