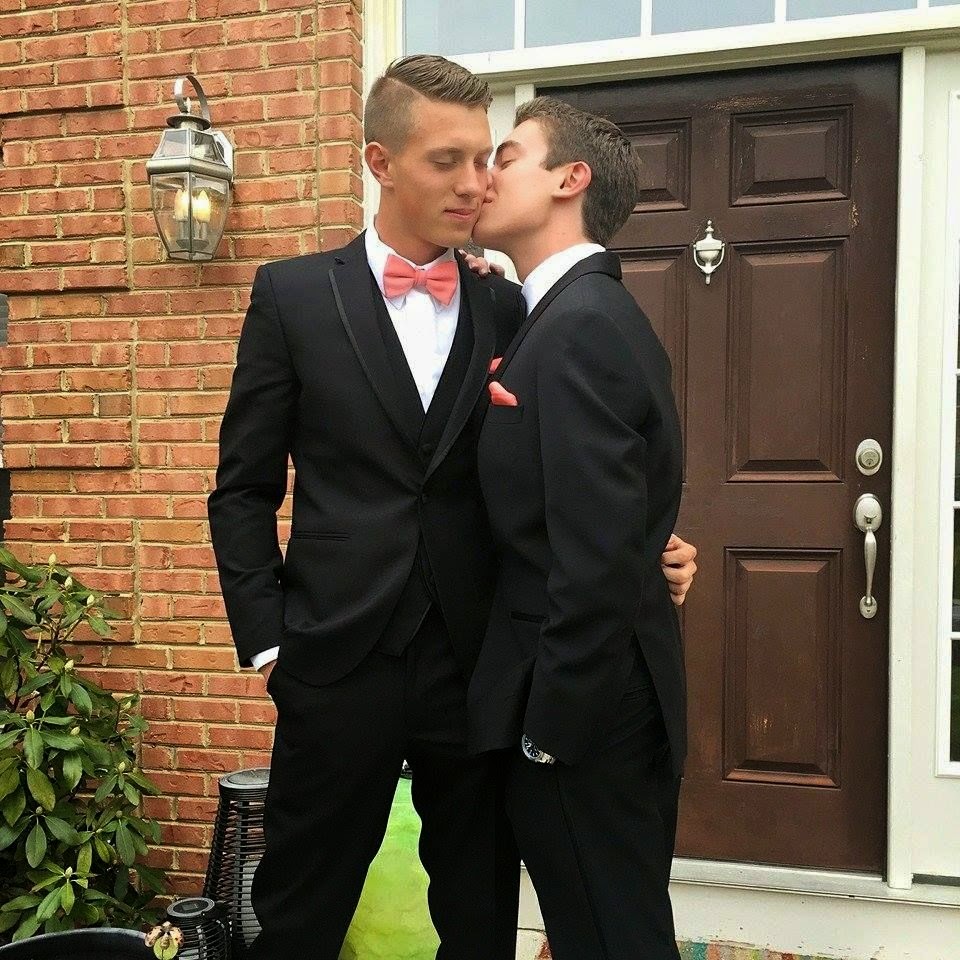 While there is much yet to be accomplished in the realm of gay rights and gay acceptance, things have traveled light years from when I was in high school. For one thing, when I was in high school, being gay was literally still classified as a mental illness. That did not change until three years after I graduated and was in my third year of college. Similarly, no gay would have dreamed of going to the prom with a same sex date.  Instead, I and so many others played the game of trying to be what family and society expected.  Yes, there were those I would have loved to have gone to the prom with (all boys and none of whom ever knew my feelings), but instead I  asked girls to the prom both years that I went to the prom and conformed to expectations.  I tried desperately to conformed to expectations for another 32 years.  Thus, I find it so amazing to read the happy story of two high school gays (pictured above) who got to do what I never did - go to the prom as a couple in love.  Here are highlights from Out Sports:

It's prom season at high schools across the country, a special time that until recently has been reserved for straight student couples. A sign of growing acceptance and change took place in West Virginia on Saturday night.

The Mussleman High School senior prom was held at The Heritage Hall in Inwood, West Virginia. Among the couples attending were Michael Martin, a Mussleman senior, and his boyfriend Logan Westrope, who attends Hedgesville High School.

Michael was a four-year starter on his school's soccer team, making all-state as a goalie. He is also an all conference swimmer and tennis player. He told his coming out story on Outsports in December, in what was our most-viewed story of 2014. Michael will attend Wilson College in Pennsylvania this fall, major in Environmental Sustainability and play soccer. Logan plays tennis for Hedgesville High School. He will attend Penn State University and major in meteorology. The two have been dating for four months.

"We knew this would be a night to remember," Logan told Outsports. "We walked in, checked in with our tickets, and were off to have fun!  At first we were both a little hesitant to hold hands, not knowing how the rest of the student body would react. But after a short while, we were always next to each other and danced together the whole night.

"Some of the slow songs we danced to were 'Stay With Me' (Sam Smith), 'See You Again' (Wiz Khalifa), and 'All of Me' (John Legend). At the moment when the slow songs played, we would just stare into each other's eyes and would think of how lucky we are to have each other.

"We didn't hear any negative comments about Michael and I. A lot of people would come up to us (especially the girls) and say, 'You both are so cute!' or 'You guys look great!'  Once we left the prom, I remember Michael saying to me in the car, 'Logan, this is our last prom and I'm so glad I got to spend it with you.' I couldn't have asked for a more perfect night."

Congratulations to Michael and Logan.  I am very happy for them.  Meanwhile, a part of me is sad that I missed so much in my life.  I hope and pray that what Michael and Logan experienced will soon be the new normal in this country.

Email ThisBlogThis!Share to TwitterShare to FacebookShare to Pinterest
Labels: broken heart, coming out in mid-life, gay acceptance, growing up in the closet, high school prom