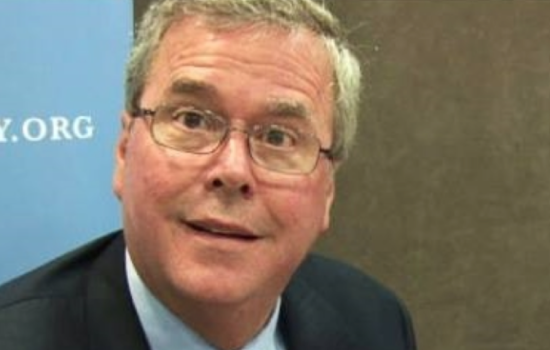 The despicable George W. Bush used gay marriage bans to help boost Christofascist turnout in the 2004 election cycle and now his brother Jebbie is proving himself to be equally despicable and making statements that legalization of same sex marriage nationwide could force church pastors to conduct same sex weddings.  The danger of that happening is zero since under the First Amendment, religious denominations set their own rules and regulations about marriage ceremonies and a host of other rituals.  Jebbie knows this is true and even Antonin Scalia backed down when he tried to play that canard during oral arguments this past week.  The take away?  Jebbie will say and do anything - including blatantly lie - to pander to the ugliest elements of the GOP base.  The Washington Blade looks at Jebbie's shameless conduct.  Here are excerpts:

Likely Republican presidential candidate Jeb Bush echoed fears on Thursday ministers would have to perform same-sex weddings if the U.S. Supreme Court ruled in favor of marriage equality — despite assertions from LGBT advocates such a ruling would have no bearing on the clergy.

The former Florida governor made the remarks during a National Review Institute summit in D.C. in an exchange with National Review editor Rich Lowry. The moderator asked Bush if press reports were accurate he wanted a fix to the Indiana religious freedom law signed by Gov. Mike Pence seen to enable anti-LGBT discrimination.

“I didn’t say that,” Bush said. “I supported Pence. I think he needed to create clarity the law was not an attempt to discriminate against people, it was an effort to provide some space for people to act on their religious conscience.”

Bush called for finding a balance in law between that prohibits government discrimination against gay, lesbian and bisexual people, but enables individuals to act on their conscience.

“We need to get to a place where government’s not going to discriminate against people because of their sexual orientation, and at the same time, make sure that there is ample space for people not just to have a religious view, or just to be religious, but to actually act on their religious view,” Bush said. “Conscience is what we need to protect, and I fear that we’re not finding that balance right now.”

As an example of a potential lack of balance, Bush cited concerns expressed by U.S. Associate Justice Antonin Scalia during oral arguments before the Supreme Court on Tuesday that clergy would be forced to perform gay weddings if the court ruled for marriage equality. The response from U.S. Solicitor General Donald Verrilli to the concerns was inadequate, Bush said.

“I read some of the transcript, and the solicitor general in defense of the government’s position, when, I guess it was Scalia or someone asked about this question of ‘Well, does that mean that the church or other religious institutions are discriminating if they don’t want to participate?'” Bush said. “And he said, ‘That’s not what’s in front of you today.’ Now maybe I’m misinterpreting that remark, but my interpretation of that was, ‘Well, that might be in front of you tomorrow.’ And that’s where I think we need to focus.”

Bush’s account of the exchange is faulty. Scalia indeed expressed concerns during oral arguments that ministers may be forced to conduct same-sex weddings, but the attorney before the bench at the time was Mary Bonauto, civil rights director for Gay & Lesbian Advocates & Defenders, who gave assurance no clergy would be forced to participate in a same-sex wedding.

“If one thing is firm, and I believe it is firm, that under the First Amendment, that a clergyperson
cannot be forced to officiate at a marriage that he or she does not want to officiate at,” Bonauto said at the time.

Also responding to Scalia’s concerns during the arguments was U.S. Associate Justice Elena Kagan, who said under current law many rabbis in the Jewish faith don’t marry Jews to non-Jews, but are still able to fulfill their constitutional requirements.

Evan Wolfson, president of the LGBT group Freedom to Marry, said the solicitor general, LGBT advocates, the Constitution and even several justices made clear ministers would be exempt from any ruling on marriage.

Let's not forget Bush's role in the Terri Schiavo debacle.  The man will do anything to prostitute himself to the Christofascist extremists.
Posted by Michael-in-Norfolk at Saturday, May 02, 2015