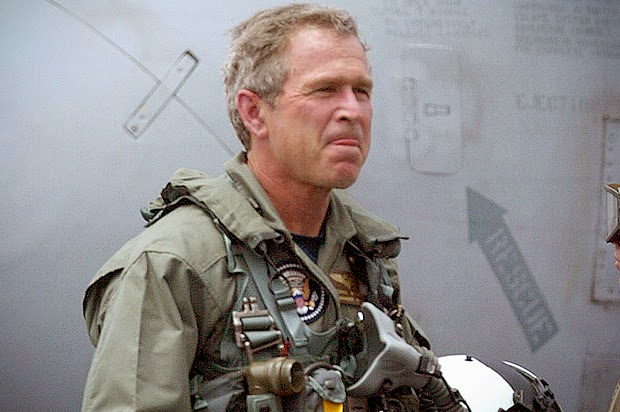 To say that I despise George W. Bush is probably an understatement.  He is without a doubt the worse president of my life time - even Richard Nixon may have been better, although it is a close contest.  Having set in motion all of the elements that have given rise to ISIS and destabilized the Middle East, having squandered thousands of American lives and flushed down the toilet billions of taxpayer dollars, the idiot-in-chief is now trying to give advice on Middle East affairs and in the process rehabilitate his horrific legacy.   Oh, and did I mention that he and Dick Cheney authorized war crimes?  The man is nothing short of a blight on America.  Even more scary is that his brother Jebbie wants to be president and is surrounding himself with the same war mongering cretins who got us into the Iraq/Afghanistan quagmire in the first place.  A piece in Salon and another in Vanity Fair look at Bush's outrageous amnesia about the horrors he has wrought.  First these highlights from Salon:

Arguably the best thing George W. Bush ever did for his party was to keep quiet in the years following his presidency. Winning elections in a political environment shaped by Bush’s legacy – a bloody and unpopular conflict in Iraq and a cratering economy – was difficult enough. The last thing Republicans needed was W. out in the public eye smirking and drawling about staying the course. So he exiled himself to the ranch in Crawford and took up painting.

But Bush’s political hermit act couldn’t last forever. His brother’s likely entrance into the 2016 presidential race guaranteed that we’d hear from him sooner rather than later, and it’s only natural that after years of self-imposed silence, Bush would feel the urge to get out there and talk politics again. And so this past weekend, Bush spoke to a Republican donor conference in Las Vegas about the Middle East and served up some harsh critiques of his successor’s foreign policy. It was classic Bush, in that he seemingly refused to consider for even a moment that much of what we’re dealing with in the Middle East are the unintended consequences of his own epic policy failures.

According to a transcript of Bush’s remarks provided to Bloomberg’s Josh Rogin, Bush came down hard on Barack Obama for ruining all the good work he and his administration had done in Iraq . . .

The “plan” in Iraq had not been working for years, as evidenced by the ever-rising death tolls of American troops and Iraqi civilians. But Bush, as you might recall, was something of a stubborn man, and he stuck with the “plan,” insisting all along that it was working, even as the country fell apart before our eyes. Also, anyone who questioned the “plan” was immediately slimed by Bush, Karl Rove, and/or Dick Cheney as a traitorous, terrorist-appeasing, cut-and-run coward.

[O]ne could go on and on in this vein. It’s silly to think that Bush would ever cop to the enduring failures of his disastrous Iraq adventure, but he at least had the good sense to keep his mouth shut. Now he’s out there defending the Bush record and letting it be known that he’s very concerned about how all the catastrophes he helped author are playing out.

Vanity Fair echos much of the same and also underscores that Americans need to remember that a Bush brought us these disasters and, by implication that we don't need another Bush to make matters even worse once again.  Here are highlights:

It has been an unbelievable 25 years since George H. W. Bush started us on the adventure that still isn’t over in Iraq and Afghanistan. There are American soldiers fighting and dying in the Middle East right now who weren’t even born when Bush the Elder declared the Iraqi invasion and occupation of Kuwait to be an intolerable situation and sent roughly half a million Americans halfway around the world to reverse it.

Twenty-five years down the road is not a bad moment to stop and ask, What the heck was that all about? And what did we accomplish for our pains, especially the sacrifices of individual American soldiers?

I’ve never understood how it honors dead and wounded troops to perpetuate mistaken wars, in which their numbers can only increase.

[The] goal, which had democracy spreading from Iraq to Saudi Arabia to Syria and beyond, never came close to being realized. . . . . The Arab Middle East today offers various forms of government. There is “royalty” of dubious provenance, as in Saudi Arabia and Kuwait—generally pro-American but ungrateful and untrustworthy. There are strongmen, but they can be longevity-challenged. Some regimes last weeks, others last decades, and none is a totally reliable ally. Then there is government by no government: the chaos of anarchy punctuated by atrocities in places like Syria, Libya, and much of Iraq.

Nothing better exposes the disingenuousness (or, at best, the confusion) of America’s motives in the past 25 years than the palpable disappointment of Bush and his administration—notably Vice President Dick Cheney—at not finding weapons of mass destruction.

[I]f the war was a mistake, even an innocent or well-intentioned mistake, any justification for staying on and on has disappeared as well. More than a decade later, why are we still there? Max Boot, writing in Time magazine, used the word “credibility” to explain why we had to stay somewhere we never should have gone. I thought that, after Vietnam, we had pretty much killed that notion. But no, it’s back.

Where did ISIS come from? What ever happened to the other Middle East groups we used to know? Where is al-Qaeda? How about the Taliban? Does anyone remember the mujahideen? If you do, you’re really showing your age. The mujahideen were the freedom fighters we armed and trained in order to drive the Soviets out of Afghanistan—a shrewd bank shot, everyone agreed, until, after the Soviets slunk away, we counted the leftover Stinger missiles in the freedom fighters’ broom closet and realized that many were now in the hands of unfriendly elements. And a lot of the mujahideen had gone with them.

Twenty-five years of this! And we were almost out of there when ISIS came along, through a door we opened to them in the first place.