Bernie Sanders Announces Campaign for President as a Democrat 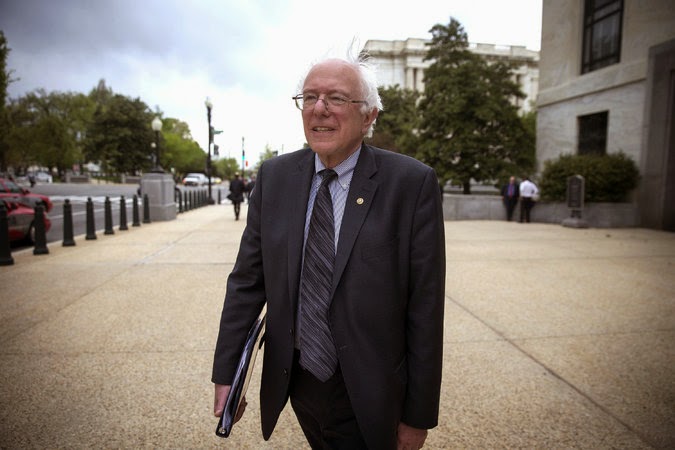 Hillary Clinton now has a challenger for the Democrat Party nomination: Vermont Senator Bernie Sanders.  I like Sanders on a number of issues: avoiding fool's errand foreign wars, reining in income inequality, controlling big banks, and liberal social positions.  Although he's thought to be a long shot, he may force Hillary to take some bolder positions.  Moreover, he certainly will not be timid in slamming failed GOP policies, including the GOP's reverse Robin Hood agenda.  Here are highlights from the New York Times on Sanders' announcement:

Senator Bernie Sanders, an independent from Vermont, announced Thursday that he was running for president as a Democrat, injecting a progressive voice into the contest and providing Hillary Rodham Clinton with her first official challenger for the party’s nomination.

Avoiding the fanfare that several Republicans have chosen so far when announcing their candidacies, Mr. Sanders issued a statement to supporters that laid out his goals for reducing income inequality, addressing climate change and scaling back the influence of money in politics.

Mr. Sanders’s bid is considered a longshot, but his unflinching commitment to stances popular with the left — such as opposing foreign military interventions and reining in big banks — could force Mrs. Clinton to address these issues more deeply.

“I think it is time for the American people to say enough is enough,” he said in an interview. “We need an economy that works for all of us and not just for a handful of billionaires.”

Mr. Sanders, 73, has said that he will not run a negative campaign and that he has never run an attack ad in his life. A self-described “Democratic socialist” and grumpy grandfather-type, Mr. Sanders has promised to steer the Democratic Party toward a mature debate about the issues he is passionate about.


Democrats who have been hoping for more liberal candidates to enter the race, such as Senator Elizabeth Warren of Massachusetts or former Gov. Martin O’Malley of Maryland, cheered Mr. Sanders’s decision.

“Having Bernie Sanders in the race, calling for populism, will help open the political space for people like Hillary Clinton and others to take bold stands,” said Adam Green, a co-founder of the Progressive Change Campaign Committee.

If anything, Mr. Sanders, who embraces his reputation for being gruff, abrupt and honest, promises to be bold. Recalling that he has defeated Democrats and Republicans with far greater financial resources in his long career, Mr. Sanders suggested that his campaign should not be taken lightly.  “I think people should be a little bit careful underestimating me,” he said.