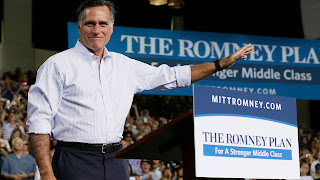 In addition to confirming that in 2011 Mitt Romney paid a lower tax rate than most secretaries, the returns also confirmed that Romney's family trust invested in Cnooc Limited, a state-owned Chinese oil company that trades with Iran, and a Chinese government controlled bank.  So much for being tough on China.  Romney's trust also bet against the U.S. dollar according to the New York Times:

The trust also invested in derivative securities linked to the Japanese stock market and to an index that includes stocks in every major country except the United States. It invested in a derivative that would profit if the dollar fell against a group of foreign currencies.


But back to Romney's Chinese investments.  Here are highlights from Gwaker:

Mitt Romney's 2011 tax returns, which were finally released today, show that Romney's family trust invested in two Chinese companies, a bank and a state-owned oil company. Then, as Romney's presidential campaign gained momentum, the trust sold the shares. This might not a big deal if Romney hadn't spent much of the past two years criticizing China for using unfair trade practices, and then faulting Obama for not being tougher on China's policies.

So while Obama was spending 43 months not being tough enough on China's trade policies, Romney's trust was trying to profit from them. And then, through pure coincidence, Romney's family trust sold their shares in the two companies just as Romney escalated his presidential campaign (and criticisms of China).


Of course, Romney would never do something as transparently manipulative as instruct his bookkeeping lackeys to match his considerable finances to some politically advantageous figure or goal.

Romney is a douche bag who will do or say anything that he deems potentially convenient at a particular moment in time.   There really isn't any other conclusion one can reach.
Posted by Michael-in-Norfolk at Monday, September 24, 2012