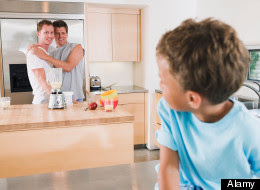 France continues to head towards approving full same sex marriage rights as reported in Huffington Post's Gay Voices.  In addition, since the move will likely include full adoption rights, the draft law would remove the terms "mother" and "father" from birth certificates and instead use the word "parent."  Needless to say, the Catholic extremists who want everyone to have to live according to their religious beliefs are screaming and bellowing.  Society and understanding of sexual orientation are evolving, yet the Catholic Church and its mindless sheep followers continue to cling to the same mentality that led to Galileo being condemned for heresy.  Here are article highlights:

France could very well become the next nation to legalize same-sex marriage, but lawmakers have reportedly gone a step further with a proposal that could ban the use of the words "mother" and "father" from all government documents.

The Telegraph cites the draft law as specifying that "marriage is a union of two people, of different or the same gender," and also states that all references to "mothers and fathers" in the nation's civil code will be swapped for the non-gender-specific "parents." In addition, the law would also give equal adoption rights to same-sex couples, the publication notes.

France’s Justice Minister Christiane Taubira is quoted as telling French newspaper La Croix, "Who is to say that a heterosexual couple will bring a child up better than a homosexual couple, that they will guarantee the best conditions for the child's development? What is certain is that the interest of the child is a major preoccupation for the government."

Not surprisingly, the move has incensed France's Catholic population, who last month revived a centuries-old custom with an updated national prayer that included references to both same-sex marriage and euthanasia reforms that are currently being planned by the government. Last week, Cardinal Philippe Barbarin warned followers that legalized incest and polygamy could potentially follow if same-sex couples earn the right to wed.   "Gay marriage would herald a complete breakdown in society," he is quoted by the Daily Mail as saying during a radio interview.

The draft law will be reportedly be presented to President Francois Hollande's cabinet for approval on Oct. 31. Same-sex and heterosexual civil unions, which offer limited benefits for couples, have been legal in France since 1999.

Personally, short of physical abuse, the worse kind of abuse a child can experience is to be raised in a closed minded, ignorance embracing conservative Christian (or Muslim) home setting.  Being raised in such a home inflicts all kinds of psychological harm on children and youths.


Posted by Michael-in-Norfolk at Wednesday, September 26, 2012