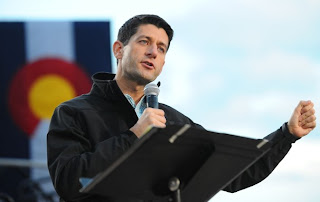 The GOP base was in near orgasm frenzy when Mitt Romney tapped Paul Ryan to be his VP running mate.  They believed that Ryan would fire up the party base and allow for a solid conservative agenda to be presented to the nation.  Well, it seems that outside of those gathered around the GOP Kool-Aid dispenser, Ryan is having a far different impact than envisioned.  In fact, there is some indication that in key swing states, Ryan and his proposals for Medicare are driving voters into the waiting arms of Barack Obama.  Personally, I'm thrilled because I see Ryan as the antithesis of what a caring Christian ought to be in terms of supporting a safety net for those less fortunate.  It may be Mitt Romney who made the infamous statement about the 47%, but Ryan seems to really, really believe exactly what Romney was dumb enough to say out loud.  Here are highlights from a Washington Post piece that looks at Ryan's likely toxicity:

Voters in three critical swing states broadly oppose the far-reaching changes to Medicare ­associated with the Republican presidential ticket and, by big margins, prefer President Obama to handle the issue, according to new state polls by The Washington Post and the Kaiser Family Foundation.

For seniors in Florida, Ohio and Virginia, Medicare rivals the economy as a top voting issue. And by majorities topping 70 percent, seniors say they prefer to keep Medicare as a program with guaranteed benefits, rather than moving to a system in which the government gives recipients fixed payments to buy coverage from private insurers or traditional Medicare, as Romney advocates.  Generally, the more voters focus on Medicare, the more likely they are to support Obama’s bid for reelection.

The future of Medicare, the federal health program for the elderly and disabled, has become a flash point in the campaign since Romney’s selection last month of Rep. Paul Ryan (Wis.), chairman of the House Budget Committee, as his running mate. The choice of Ryan — who wrote a proposal that would move Medicare toward vouchers as part of an overall attempt to curb the deficit — is considered a bold and politically risky move, given Medicare’s popularity.   Now, the challenges for Romney in the aftermath of the Ryan selection are becoming clear.

[V]oter distaste for a Ryan-like plan may insulate Obama from the political fallout. It appears that Medicare may have become a winning issue — for Obama.  In Virginia, Cheryl Schaffer, 64, said she will vote for Obama in part because of his differences with Romney on Medicare.  “I’m hoping to have Medicare in six months,” said Schaffer, a Richmond retiree. “I don’t like what Romney is going to do to it.”

Although seniors nationwide dislike the idea of moving away from the current system, their opposition is even more pronounced in Florida, Ohio and Virginia, where both candidates have spent weeks saturating the airwaves with Medicare attack ads.

Obama hammers the Ryan plan continually, telling supporters at a campaign event in Milwaukee last Saturday that Romney and Ryan would “turn Medicare into a voucher program in order to pay for tax cuts for the very wealthy.”

This spells trouble for Romney, said Robert Blendon, a professor at Harvard University who monitors public views on health-care issues.

Asked whom they trust to deal with the Medicare program, Ohio voters favor Obama over Romney by a margin of 19 percentage points. The president has a 15-point advantage on the issue in Florida and a 13-point lead on it in Virginia. In a separate national poll from the Kaiser Family ­Foundation, released Thursday, Obama’s 17-point lead over Romney on Medicare is larger than it has been across public polls all year.

Perhaps the GOP leadership believed that the party's continued gay bashing and appeals to racism and anti-immigrant fervor would keep seniors in their column.  It would seem that the gamble isn't working as expected.
Posted by Michael-in-Norfolk at Friday, September 28, 2012