UPDATED:  Last night's on camera interview of the plaintiffs in the lawsuit against United Continental for desecrating their luggage can be found here.  I hope readers will listen to the interview and draw their own conclusions.  In doing so, remember this: the zipper on the luggage was completely undamaged and the tape shown in the photo had Continental Airline's logo on it. 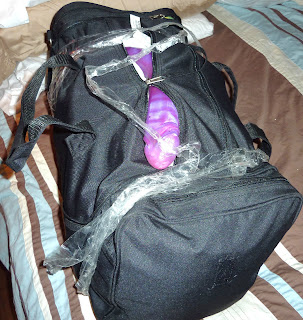 Last month I wrote about the lawsuit filed against United Continental Airlines by two close friends who had their luggage desecrated by personnel at Houston Intercontinental Airport in Houston as they returned from a trip to Costa Rica.  I did a companion piece on The Bilerico Project that was picked up by Huffington Post which in turn went viral and literally swept the news media around the world.  Tonight at 11:00 PM the couple gives their first on camera interview to discuss their experience and their motivations for suing the airline.  Here are highlights from WTKR-TV 3 as it promotes the interview:

Most people who travel tolerate the fact that strangers go through their personal belongings inside their luggage. It’s creepy thinking of someone going through your underwear, but it’s an intrusion we have come to accept in the years since 9/11.

As Barbara Ciara reports, a Norfolk couple claims baggage handlers displayed the private contents of their luggage to create public pain.  Hear their story, tonight at 11.

Barbara Ciara is well respected in Hampton Roads and has shown herself to be non-judgmental of the LGBT community.  Hopefully, the interview will do the story and my friends justice.  I will report more tomorrow after the segment airs and is available on line.
Posted by Michael-in-Norfolk at Monday, September 24, 2012