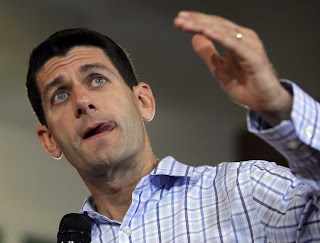 With the Romney/Ryan ticket seemingly head towards a Titanic like disaster what does Paul Ryan focus on?  Contraception, of course, and attacks on the federal the mandate requiring insurance companies to offer contraception.  To me the phenomenon is symptomatic of the extremism and batshitery that has overtaken the Republican Party.  The good news is that as the Romney/Ryan ticket appears to be increasingly sinking in the polls, perhaps a disastrous loss will put constraints of Ryan's political future.  In many ways Ryan strikes me as a less insane version of Virginia's Ken "Kookineli" Cuccinelli.  A piece in the New York Daily News looks at Ryan's idiotic focus on contraception in an apparent effort to continue to lick the boots of the Christofascists.  Here are excerpts:

Rep. Paul Ryan must feel like the forgotten prince. The rising star in the Republican party is going down on a sinking ship, pulled by the anchor Mitt Romney, and he can’t seem to break free. Ryan has tried and failed to explain Romney’s gaffes, forced instead to stick to his own robotic messaging with tweets like, “We face a very clear choice in this election. Four more years of debt, doubt, decline or a real recovery to save the American Idea.”

When you’re forced to resort to alliteration your campaign is looking a little sad. But worse than Ryan's corny platitudes are his own public statements of late that are being overshadowed by Romney’s missteps shouldn’t be ignored.

While Romney was dismissing half the country as lazy freeloaders, Ryan was promising to end the contraception mandate included in Obamacare.

The controversy over the mandate stems from a tenuous argument that claims religious organizations, which may be morally opposed to contraception, are forced to provide insurance plans for employees that include contraception under the new rule.

Ryan’s flippant, “it will be gone,” may sound great to a rally of die-hard supporters in Florida, but birth control pills, unlike abortion, are not generally controversial.   Ryan’s comments are sure to come up in the vice presidential debates, where Vice President Joe Biden should be prepared to pounce on this remark that shows Ryan, just like his running mate, is completely out of step with mainstream America.

Affordable access to contraception is definitely not something men or women want to get rid of on day one. The rising star of the GOP should have known better.

Ryan has happily embraced the 11th century mindset that now predominates in the GOP and I hope he meets defeat accordingly.  We need leaders who want to move the nation forward, not take us back to a time when blacks, women, Hispanics and gays were all consistently treated as less than citizens and religious based hate and bigotry ran unfettered.
Posted by Michael-in-Norfolk at Wednesday, September 26, 2012