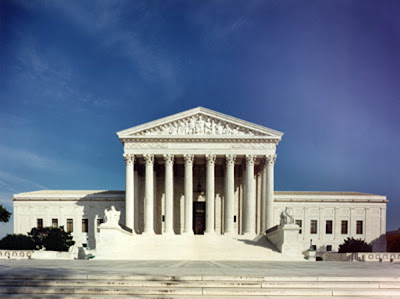 The speculation will apparently continue for now as to what the U.S. Supreme Court will do with the appeal of the 9th Circuit's upholding of the invalidation of Proposition 8 and the appeals from numerous rulings finding DOMA, the Defense of Marriage Act, unconstitutional.  The Court could still take up the cases and the next key date will be October 1, 2012 when the Court will designate additional cases that it will consider.  Here are highlights from Box Turtle Bulletin:

The U.S. Supreme Court has issued its Orders List (PDF: 136KB/10 pages) following yesterday’s conference session in which it was scheduled to consider whether to hear four LGBT-related cases. Today’s Order list indicates that the Supreme Court has agreed to accept six pending case, but the appeal of Hollingsworth v. Perry — the new name for Perry v. Brown, which itself was previously Perry v. Schwarzenegger, challenging the constitutionality of California’s Proposition 8 — was not on the list.   It’s not clear yet though that this means that the Prop 8 case was rejected by the court. We won’t learn that until next Monday, when the Supreme Court will issue a list of cases it has decided not to hear this term. If Hollingsworth v. Perry is on that list, then the Ninth Circuit Court of Appeals’ decision striking down Proposition 8 as unconstitutional will stand and California’s same-sex couples will have their marriage rights restored. But if Hollingsworth v. Perry is not on that list, then it means that the Supreme Court is still weighing whether to accept the case. It takes four justices to agree on hearing a case before it is accepted by the court.

The court also held off accepting the appeal of Windsor v. USA, which challenges the constitutionality of Section 3 of the Defense of Marriage Act. This case was brought by the American Civil Liberties Union on behal of Edie Windsor, who is required to pay $363,000 in federal estate taxes following the death of her legally-wedded wife in 2007. If she had been in an opposite-sex marriage, her estate tax bill would have been zero. Four other DOMA challenges are making their way through the Appeals courts, and the U.S. Department of Justice has asked the Supreme Court to hear three of those cases along with Windsor for a more comprehensive look at DOMA’s constitutionality.

Diaz never held the withdrawal of benefits from same-sex couples unconstitutional; it upheld a preliminary injunction on the basis that plaintiffs are likely to succeed.