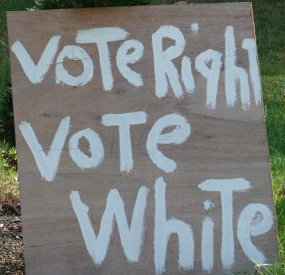 I have noted before the strong under current of racism that is a hallmark of today's Republican Party.  True, there are many in the GOP who have always been less than friendly to non-whites, but at least most of them outside of redneck circles could feign a modicum of decency.  Less and less such is the case and when not blaming the nations calamities on gays, the minions of the GOP blame them on people of color be they black, Hispanics or some other racial minority.  Not unsurprisingly, white Republicans from some of Virginia's most backward areas have happily joined in the open racism.  A piece in PoliticusUSA looks at this troubling phenomenon. I hope that the author is correct and that a backlash will take place in the near future.  Here are excerpts:

The Republicans have dropped all pretenses that this presidential race isn’t about race. And they’ve brought in the suit and tie set in playing the dirtiest card in the political deck. Hyperbole and unrelenting criticism are part and parcel of both parties opposition to whoever is the current occupant of the White House  .   .   .   .
But, in their desperation, the Republicans have blown by hyperbole and criticism into the disgusting world of pure, unadulterated and undisguised racism.

Being fitted for their own custom sheets befitting recent blatant racist comments are Newt Gingrich, John Sununu and that ignorant collection of redneck Obama-haters from the leadership of the Mecklenburg County Republican Party in Southern Virginia (surprise, surprise). This latter bunch photo-shopped depictions of President Obama as a witch doctor and Neanderthal cave-man…something to do with the ‘birther’ issue.

[I]n strict obedience of what is obviously a widely distributed white paper to bail Romney out his 47% comment, Gingrich added, “I suspect that he’s (Obama) pretty contemptuous of the rest of us.” Newt and company might be able to fool all of the redneck goobers all the time, but you can’t fool informed Obama supporters, ever.

Speaking of old racist fools, the 73-year-old Sununu clearly demonstrates that age and smarts are no barrier to hatred. Sununu, a former New Hampshire Governor and Pappa Bushes Chief of Staff, is supposedly possessed of a very high IQ. He used not a point of it in calling Obama lazy and detached and how he wished the president would “learn to be an American.”

In a couple of years, I believe the evangelicals are going to be just as responsible for the opposite effect, a return to control of the House by Democrats. The racist, right-wing, bible-thumping zealots and their Tea Party clones are getting so tiresome and so counterproductive as to disrupt government at every level, national, state and local.

It may not happen until 2016, but it will happen within a 2 – 4 year window. The states will follow suit, just as they did in 1994 with the possible exception of the Deep South, a region so mired in racism and abject political stupidity, that their citizens may suffer the fools of gooberville politics indefinitely.