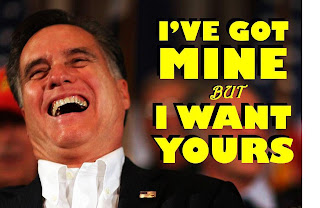 While Mitt Romney claims on the campaign trail that he would create new jobs for American workers, while at Bain Capital he did largely the opposite as he and his fellow vulture capitalists swooped down on companies, bought them, loaded them with debt, and then dismembered them for a profit.  Sometimes for huge profit.  And what of the employees of these companies?  They were all too often left jobless, with no health insurance and pensions that evaporated.  In the mind of Romney and his compatriots, this behavior comprised "harvesting" companies.  Harvesting riches for themselves and leaving little or nothing for everyone else, especially the former employees.  Yes, Bain had a few successes where companies survived Bain - Romney points to Staples - but many more did not.  And then, of course there was the exporting of jobs by Bain and its affiliates to China and elsewhere.  Currently, Romney hopes that Americans will somehow forget how he got so wealthy and the rapaciousness with which he left many, many Americans unemployed.   But there was a time when Romney boasted about what he and Bain planned to do.  Mother Jones has unearthed a video where Romney explained his plan to "harvest companies. Here are excerpts from Mother Jones' piece on this video:

Campaigning for the presidency, Mitt Romney has pointed to his stint as the founder and manager of Bain Capital, a private equity firm, as proof he can rev up the US economy and create jobs at a faster clip than President Barack Obama. Last year, while stumping in Florida, Romney declared, "You'd have a president who has spent his life in business—small business, big business—and who knows something about how jobs are created and how we compete around the world."

But at Bain, Romney's top priority wasn't to boost employment. As the Wall Street Journal recently noted, creating jobs "wasn't the aim of Bain or other private-equity firms, which measure success by returns produced for investors."


Mother Jones has obtained a video from 1985 in which Romney, describing Bain's formation, showed how he viewed the firm's mission. He explained that its goal was to identify potential and hidden value in companies, buy significant stakes in these businesses, and then "harvest them at a significant profit" within five to eight years.

The video was included in a CD-ROM created in 1998 to mark the 25th anniversary of Bain & Company, the consulting firm that gave birth to Bain Capital. Here is the full clip, as it appeared on that CD-ROM (the editing occurred within the original):

[T]his short clip offers a glimpse of Romney when he was at the start of his private equity career and saw businesses as targets of opportunity that could be harvested for the benefit of his investors, not as long-term job creators or participants in a larger community. His remarks were hardly surprising, but they did encapsulate the mindset of get-in/get-out private equity deal makers.

In this clip, Romney mentioned that it would routinely take up to eight years to turn around a firm—though he now slams the president for failing to revive the entire US economy in half that time.

Was there any thought or concern for those who lost their livelihoods and/or retirement funds?  Of course not.  It was all about enriching Romney and his investors.  The man is despicable and as far as one can get from the Gospel message of caring for one's neighbor.  Romney rode to riches over the shatter lives on many, many Americans.
Posted by Michael-in-Norfolk at Saturday, September 29, 2012