Quotes of the Day: Why Romney and the GOP Are Losing 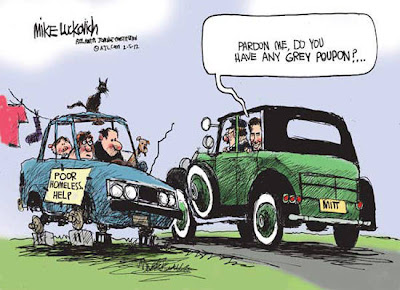 In follow up to my earlier post today in which I attributed Romney's continuing drop in the polls in significant part to the American public's growing realization of what today's Republican Party and its candidates stand for.  Romney may be a horrible and incompetent candidate, but his bigger problem is the toxic brand he is selling.  First, these highlights from Andrew Sullivan on Romney's sudden effort to pretend that he cares about ordinary Americans - you know, the mooching 47%:

The trouble is: the instant transformation might make things worse. Voters could look at this and say "This is just another sales technique. He'll try anything." The ideological shape-shifter becomes a human shape-shifter. He actually underlines the difference between his snide, callow remarks about half of Americans at a big fundraiser ... and this new Mr Rogers version.

[T]he GOP base had their chance, and Jon Huntsman got nowhere. The whole thing reinforces my conviction that this is a party in a near death spiral.  They cling to bromides from 1979, trying to repeat the unrepeatable in utterly different circumstances. Both Romney and Ryan live in bubbles - among mega-money-men and life-long Rand-groupies - utterly alien to most Americans. This is a riveting moment: a party nearing the edge of what could be a psychic break. By which I mean:

Patients suffering from psychosis have impaired reality testing; that is, they are unable to distinguish personal subjective experience from the reality of the external world.

Robert Reich is equally direct in his description of the root cause of Romney's flailing campaign in a Huffington Post column.  Here are excerpts:

The Republican primaries, and then the Republican convention, have shown America a party far removed from the "compassionate conservatism" the GOP tried to sell in 2000. Instead, we have a party that's been taken over by Tea Partiers, nativists, social Darwinists, homophobes, right-wing evangelicals, and a few rich people whose only interest is to become even wealthier.

The second view about Romney's decline also explains the "negative coat-tail" effect -- why so many Republicans around the country in Senate and House races are falling behind. Scott Brown, for example, is well-liked in Massachusetts. But his polls have been dropping in recent weeks because he's had to carry the burden of the public's increasing dislike of the Republican Party. The same is true with regard to Republican senate races in Florida, Virginia, and every other battleground state.

And if one wants to see what rank and file Republicans are like, one can look to what took place in Cassy Zobel's yard where she had an Obama campaign sign.  The image of how she found the sign (via Joe My God) is set out below.  Oh, and when you put up a new sign, it was stolen.

Posted by Michael-in-Norfolk at Wednesday, September 26, 2012