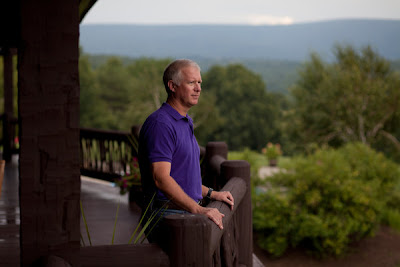 In some ways it is heartening to see older gays finally coming out.  Finally coming to terms with who one is - even if it takes years of therapy to make the transition - is extremely liberating and not hating and despising oneself daily makes for such a sense of inner peace.  That said, there are still many trials and tribulations that need to be surmounted and, as noted in a prior post, for married gays there is the calamity of telling your straight spouse and in many cases children.  Indeed, I DO understand why some individuals choose to take their own lives as an alternative given the daunting journey coming out later in life entails.  One individual who has decided to take the plunge and be honest with himself and the world is former Pittsburgh Pirates owner and newspaper heir  Kevin McClathy.  In a column with Frank Bruni of the New York Times McClatchy (pictured above) talks about his decision to come out.  Here are some excerpts:

THE way Kevin McClatchy figured it, he had to choose. He could indulge his dream of presiding over a big-time professional sports team, or he could be open about his sexuality. The two paths didn’t dovetail.

He went with sports, and in February 1996, at the age of 33, became the youngest owner in major league baseball when he led a group of investors who bought the Pittsburgh Pirates. For the next 11 years, he was the team’s managing general partner and chief executive officer, not to mention its public face. And for all of that time, he took pains not to let his players, the owners of other teams or anyone beyond a tiny circle of family and close friends learn that he was gay.

He stepped away from the Pirates in 2007, but it took five years for him to reach the point where he felt even remotely comfortable sitting down with a journalist, as he did with me recently at his home here, about 50 miles east of Pittsburgh, to talk about his private life. Secrecy is a hard habit to break. And the world of professional sports, to which he is still connected, isn’t exactly crowded with proud, out gay men and women.

He once did some arithmetic. Over the last four decades, he said: “Tens of thousands of people have played either professional minor league baseball or major league baseball. Not one has come out and said that they’re gay while they’re playing.” Nor has any active player in the principal leagues of football, basketball or hockey, America’s three other major professional sports. That silence is a sobering  . . .

McClatchy, whose interview with The Times was his first public acknowledgment of his sexual orientation, could do considerable good.

And pro sports offers a frontier on which there’s considerable good to be done. One reason there has been so much attention lately to statements about homosexuality, supportive and derogatory, from prominent male athletes is that they inhabit a stubborn bastion of reductively defined masculinity, and many impressionable kids take their cues from it. If its heroes make clear that being gay is O.K., the impact could be profound: fewer adolescents and teenagers bullied, fewer young and not-so-young adults leading stressful, painful double lives.

McClatchy, 49, said that his took a toll. “I think I was more paranoid, for sure, about people,” he said. “And suspicious, definitely. And angry.” His serious romantic relationships with men were few and strained until he left sports, and his partner of the last four years, Jack Basilone, who shares his home here, told me that McClatchy remains guarded, wary.

McClatchy said, “I’m sure people will criticize me because I came out later, and I should have come out while I was in baseball and in the thick of it.”

He shook his head. “There’s no way I want to go into the rest of my existence and ever have to hide my personal life again,” he said.

I wish him well and hope he finds the peace I found eventually.  The saddest thing in my view is those who spend their entire life in the closet and never know the feeling of self-acceptance.  I cannot image an entire life of lies and unhappiness and possible futile efforts to change the unchangeable.
Posted by Michael-in-Norfolk at Sunday, September 23, 2012

Email ThisBlogThis!Share to TwitterShare to FacebookShare to Pinterest
Labels: closeted gays, coming out in mid-life, life in the closet, Pirates, Pittsburgh, pro-sports, self acceptance