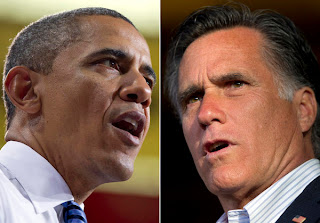 Thankfully, a new POLITICO/George Washington University poll f "battleground states" provides more bad news for Mitt "I'm a cyborg" Romney.   While the overall results are still far closer than I would like, it does appear that more Americans are deciding that they don't like the Romney/GOP vision for America.  As I noted at dinner last night I truly believe that to be a Republican nowadays, you need to either be (i) a racist who hates non-white minorities of all types, (ii) a crazed Christianist extremist, or (iii) motivated by greed and a desire to retain every possible dollar for oneself regardless of the consequences to the nation or others.  Politico looks at the new polling results.  Here are highlights:

Obama leads 50 percent to 47 percent, which is within the margin of error. His 50 percent job approval rating puts him at a crucial threshold for an incumbent seeking reelection. It’s an uptick from the spring and summer, but 48 percent still disapprove.

Romney, meanwhile, finds himself sliding in the wake of two events — the choice of his running mate and the Republican national convention — that were supposed to buoy his candidacy. His unfavorable rating ticked up from 46 percent to 49 percent over the past seven weeks, as the share viewing him favorably held steady at 46 percent. Personal likability boosts the president, who is viewed favorably by 53 percent.

“The window is narrowing for Romney, and he’s in deep, deep trouble,” Democratic pollster Celinda Lake, who helped conduct the bipartisan poll, said Sunday. “Ultimately, people don’t like this guy. If they don’t like someone, it’s hard to get people to vote for him — particularly to fire someone they do like.”

Obama now ties or has an edge over Romney on who is best to handle every major issue except the federal budget and spending.

Romney has lost his edge on jobs. A month ago, he led Obama by 6 points on the question of who is best equipped to put Americans back to work. Now they’re even. Among those who say creating jobs is their top priority, Obama’s up 11 points.

A slight majority disapproves of the way Obama’s handling the economy, yet he narrowly leads Romney on who is better to manage it.

Approval for Obama’s tax policy has risen from 46 to 51 percent in the last month, and Obama has a 4-point edge on who will better handle the issue after the two tied in the previous poll.

The Democrat has also expanded his advantage on Medicare. He leads Romney by 9 points, 52 percent to 43 percent, on who can better handle the entitlement program. The president had a 4-point edge in the week before Romney announced Rep. Paul Ryan (R-Wis.) as his running mate.

The problem for Romney is that he’s now exhausted two of his three major opportunities to win over new voters. Picking Ryan has not discernibly shifted the dynamics of the race, and the GOP convention did not shift voter attitudes.

Hostility toward Obama drives less of the enthusiasm for Romney than before. Last month, 52 percent said they supported Romney because they considered it a vote against Obama. Now it’s 42 percent. Nearly half of Romney supporters say they are voting for Romney as opposed to against Obama. This suggests that the Obama campaign’s efforts to make the election more a choice between two candidates than a referendum on the vulnerable president have succeeded to some degree.

Posted by Michael-in-Norfolk at Monday, September 24, 2012