Quote of the Day: Lady Gaga on Pope Benedict XVI 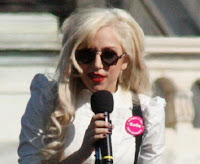 As the Roman Catholic Church hierarchy becomes increasingly reactionary and the younger generations are leaving organized religion in ever increasing numbers the long term prospect of the Church appear moribund outside of ignorant and uneducated parts of the world (Africa is principal growth area for the Church) what the Pope believes and tries to dictate through pronouncements holds less and less sway.  Especially among thinking individuals.  Benedict XVI still foolishly believes that the world as a whole cares what he and his fellow child rapist enablers/protectors think about gays and homosexuality.  Those days are fading fast.  Lady Gaga summed it up well during an interview on French radio:

On Friday Pope Benedict XVI told French bishops: “Marriage and the family are institutions that must be promoted and defended from every possible misrepresentation of their true nature, since whatever is injurious to them is injurious to society itself.”

But the Catholic singer, a long-time defender of gay rights, hit back at his comments on French radio.  She said: “I think that gay marriage is going to happen. It must. We are not actually equal—humanity—if we are not allowed to freely love one another.

“What the Pope thinks of being gay does not matter to the world. It matters to the people who like the Pope and follow the Pope. It is not a reflection of all religious people.”

Truth be told, Benedict and a significant number of bishops and cardinals belong behind bars - just like Monsignor Lynn of the Philadelphia archdiocese.  Thankfully, more and more Catholics seem to be grasping that reality and ignoring the Vatican's dictates at will.   Better yet, in the USA, Catholic Church membership is in decline.  Only the influx of Hispanic Catholics from other countries has temporarily masked what is actually occurring to the original core Church membership.  With Hispanic immigration down significantly, the real situation may soon become readily apparent.