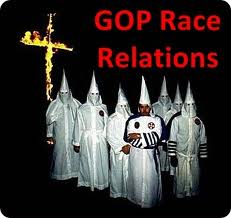 There have long been those who view the Republican Party as being anti-black (along with anti-gay, anti-Hispanic, anti-immigrant, etc., etc.).  But it wasn't always that way, at least in terms of anti-black racism.  So what happened?  A new book, Strom Thurmond’s America, by Joseph Crespino, suggests that the root cause of this change was the influx of former Southern Democrats led by the late Strom Thurmond, who switched to the GOP as the Democratic Party at the national level embraced desegregation and the Civil Rights Act - which effectively ended the Jim Crow laws.  Since then, the GOP has continued on the road to becoming a largely lily white party - especially to angry white men - that is hostile to anyone who is racially or ethnically different.  A piece in The Daily Beast looks at the transformation of the GOP and Crespino's narrative of the party saga to embrace racism.  Here are highlights:

Anyone doubting the myths conservatives cling to must consult Strom Thurmond’s America, a well-researched new book by Joseph Crespino, a historian at Emory University. The longtime South Carolina senator was representative of the trajectory so many Southern Democrats embarked on in the 1960s. As the Democrats abandoned their longtime hostility to African-Americans’ civil rights in the 1940s, Thurmond and his compatriots moved to the Republican Party. Thurmond “quit the Democratic Party at the high-water mark of the civil-rights revolution, helped Barry Goldwater win five Deep South states in 1964, and led a historic shift of white Southerners into the GOP,” Crespino writes.

Thurmond fled the Democrats when President Harry Truman urged legislators to implement the sweeping document issued by his Committee on Civil Rights, To Secure These Rights. Among other measures, the report called for ending economic discrimination, desegregating all public facilities, establishing regional offices of the Civil Rights Section of a strengthened Justice Department, passing an anti-lynching law, and creating permanent civil-rights commissions in every state to monitor civil rights.


In response, Thurmond created the States’ Rights Democrats, more commonly known as the Dixiecrats Party. “[T]here’s not enough troops in the Army to force the Southern people to break down segregation and admit the nigger race into our theatres, into our swimming pools, into our homes, and into our churches,” he said as in his first speech as the party’s presumptive president. It was the first toss in a game that would see virtually the entire South migrated to the GOP.

Strom Thurmond’s America fairly observers that racism was not the only reason.  Thurmond and the South defected from the Democrats. Many soon-to-be conservatives (most still called themselves liberals) were motivated by “Cold War anticommunism, anti-labor politics, conservative religious beliefs and opposition to liberal church groups, criticism of judicial activism, and hyper-militarism.” One might add growing concerns about crime and maintaining law and order. All of these issues were intertwined with race in many Southerners’ minds, led by Strom Thurmond.

Richard Nixon pioneered the ‘Southern strategy,’ which Crespino persuasively argues is misnamed because it was designed to appeal to the prejudices of both Southerners and a newly conservative Sun Belt. The plan was to attract Americans to the GOP by opposing busing and desegregating schools, advocating states’ rights and prioritizing law and order.  .   .   .   .   The strategy worked brilliantly. Today Democrats cannot hope to compete in the South, which is now as solidly Republican as it was once Democratic.

All of this might be of interest only to historians if Strom Thurmond’s Republican Party had nothing in common with today’s. But it does. When Newt Gingrich calls Obama a “food-stamp president,” he is maintaining his party’s post-1960s appeals to racism. When the late conservative icon Andrew Briebart manipulated a speech by African-American leader Shirley Sherrod to make her seem racist, he was appealing to the myths of whites’ victimization at the hands of blacks.

Many leading conservative figures and intellectuals not only solicit this racism; they bond it. Rush Limbaugh is the most prominent racist in all of America with his ranting against imaginary black gang-beatings of whites spurred by Obama. Right-wingers believe racism exists—but it always is directed against whites.

These delusions have real-world consequences. Though the vast majority of opposition to Obama is not remotely race-related, some of it (PDF) surely is, and conservatives not only ignore but outright appeal to it.

For northern Republican such as those in my extended family it took us a while to finally admit that what had happened to the Republican Party was indeed something ugly.  The final straw for me and other family members was when the Christofascists took over the Party and the concept of the separation of church and state ceased to exist.  Since our exodus from the GOP years ago at this point, things have only gotten worse.  We did not leave the Republican Party - the Party left us.  It also left rationality and decency in my view.

Posted by Michael-in-Norfolk at Sunday, September 23, 2012