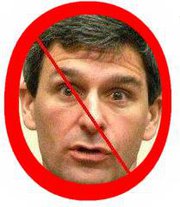 With the gender gap plaguing the Republican Party in the presidential race and other political contests - including the Virginia U.S. Senate race - one would think that perhaps is not to the time to continue the GOP's war on women here in Virginia.  That is unless one is the (in my view) utterly deranged religious extremist Ken "Kookinelli" Cuccinelli.  Rather than moderate the GOP's image with women, Kookinelli has proceeded full bore to approve regulations he forced through Board of Health through threats and intimidation that will severely limit the availability of abortion related services to many women across the Commonwealth who may now find themselves having to travel to Washington, D.C., or elsewhere for services.  Kookinelli has taken Virginia back nearly 40 years and no doubt sent the Christofascists at The Family Foundation and in Bob "Taliban Bob" McDonnell's cabinet into near orgasms.  The Richmond Times Dispatch looks at this development.  Here are story highlights:

The regulations were approved over the angry objections of abortion-rights advocates, who said the new rules were a thinly veiled attempt to curtail access to abortion services by imposing construction costs on clinics that would force many to close.

"Attorney General Cuccinelli continues to use his position of power and put political ideology before the health of thousands of Virginia women," said Tarina Keene, Executive Director of NARAL Pro-Choice Virginia.    "Today, tens of thousands of Virginia women are one step closer to losing access to critical medical care and their constitutional right to safe, legal abortion care."

Anti-abortion advocates on Monday hailed Cuccinelli's action as a victory for women's health and a "desperate attempt" to distract attention from deficiencies found at clinics.  "Fortunately, the basic safety standards adopted by the Board of Health will ultimately be put in place and Virginia's women will be safer because of them," said Victoria Cobb, president of the Family Foundation of Virginia and the wife of Deputy Health Commissioner Matt Cobb, a McDonnell appointee.

The Family Foundation's goal of forcing its religious beliefs on all Virginians is little different from the mindset of the Taliban in Afghanistan.  Under this mindset, only the Christofascists enjoy religious freedom.  As for gays, Ms. Cobb would happily see us made criminals once again and preferably forced from the state.