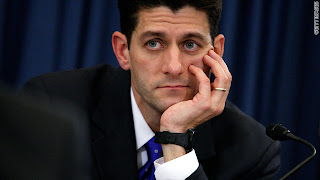 Wow!  I can't wait to hear/see the reaction of the Christofascists' reaction to this: Paul Ryan stated in an interview in Florida that DADT repeal is a done deal and that the country needs to move on.  Obviously, many in the GOP - including GOP Congressman Jim Jordan who wants to undo the repeal of DADT - are not aware of Paul Ryan's latest views on DADT.    Frankly, I agree with Ryan.  I just wonder how he's going to explain his views on DADT to the Christofascists and gay haters in the GOP.  Here are highlights from WPTV-TV:

One year after the repeal of the "don't ask, don't tell" policy that barred openly gay and lesbian service members from serving in the military, U.S. Rep. Paul Ryan (R-WI) said in an interview with WPTV NewsChannel 5 that the controversial policy should not be reinstated.

"Now that it's done, we should not reverse it," Ryan told WPTV NewsChannel 5 during a visit to Miami. "I think that would be a step in the wrong direction because people have already disclosed themselves."
Ryan was one of 160 Republicans and 15 Democrats in the House of Representatives to vote against the repeal of "don't ask, don't tell" in 2010.

Can't you see the spittle flying around the offices of FRC and Focus on the Family and NOM?  I suspect one would need dress in full foul weather gear.
Posted by Michael-in-Norfolk at Monday, September 24, 2012

It's probably the only smart thing he's said since he entered politics.

Have you seen Romney's remarks about plane windows? Truly amazing.