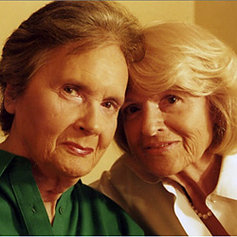 When not trying to dictate to women what they can do with their own bodies or pressing undocumented immigrants to engage in "self-deportation" the sport du jour for the GOP is to do all in its power to stigmatize and marginalize LGBT Americans and to limit any legal recognition of our relationships.  While the Obama Justice Department has ceased defending the federal Defense of Marriage Act, GOP zealots and Christianist puppets in the House of Representatives have continued to litigate in support of the discriminatory law.  Now, the U. S. Court of Appeals for the 2nd Circuit will be hearing the GOP appeal of a lower court ruling that rightly held that DOMA was unconstitutional.  The case involves Edie Windsor (at right in the photo) who was required to pay hundreds of thousands of dollars in estate taxes upon the death of her partner of 44 years thanks to DOMA's provisions.  The Wall Street Journal reports as follows:

NEW YORK — A New York court is set to hear arguments before deciding the constitutionality of the Defense of Marriage Act.   The Manhattan federal appeals court will rule months from now whether Judge Barbara Jones properly declared the 1996 law unconstitutional in June. Jones is among five federal trial judges to strike it down, along with a federal appeals court in Boston.

Jones said a Manhattan woman shouldn't have to pay federal estate taxes after her female spouse of 44 years died in 2009.  Jones said the law's efforts to define marriage intrude on the states' business of regulating domestic relations. The law's supporters say it reaffirms how marriage has always been defined in the United States. The Justice Department says the law was motivated largely by disapproval of gays and lesbians.


Reuters has these additional details on the case:

Six states have legalized same-sex marriage, including New York in 2011. Because of the Defense of Marriage Act, which was passed in 1996, federal law and government programs do not recognize those marriages.

The lawsuit was filed on behalf of Windsor by the American Civil Liberties Union in federal court in New York. Windsor is a former IBM computer programmer who married Thea Clara Spyer in Toronto, Canada, in 2007. The two were engaged in 1967.

Spyer died in 2009 after a decades-long battle with multiple sclerosis, leaving all of her property to Windsor. Because the marriage was not recognized under federal law, Windsor had to pay more than $363,000 in federal estate taxes, according to her lawsuit.

Windsor's attorneys argue that the act violates the 14th Amendment of the U.S. Constitution, which guarantees equal protection under the law.  In June, a federal district judge in New York ruled for Windsor,
finding that a central provision of the Defense of Marriage Act discriminates against married same-sex couples.

The Obama administration said last year it considered the law unconstitutional and would no longer defend it. Instead, a group appointed by the Republican majority in the U.S. House of Representatives is defending the law in courts across the country.


As I have noted before, there is NO JUSTIFICATION for DOMA - it is an improper codification of religious based bigotry into the nation's laws and needs to be struck down.  As do all of the state anti-gay marriage laws and constitutional amendments which make a mockery of the guarantees of equal protection and religious freedom embodied in the U. S. Constitution.