Focus on the Family Continues to Back Fraudulent "Ex-Gay" Ministries 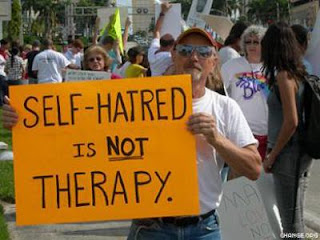 With the changes at Exodus International and the admission by Alan Chambers that no one has every successfully changed their sexual orientation the Neanderthals and religious extremists at Focus on the Family are none too happy.  As a result, the FOTF folks have gathered up their toys and are now backing a break away "ministry" that continues to market the lie that gays can "change."  The "ministry" is disingenuously named "Restoring Hope Network" and will continue to prey on religiously brainwashed and tortured gays and their self-centered parents who cannot stand the personal embarrassment of having a gay child.  Think Progress has details.  Here are excerpts:

Focus on the Family has endorsed the Restored Hope Network, an ex-gay splinter group that broke off after Exodus International announced it would no longer try to “cure” homosexuality. Restored Hope describes homosexuality as a “perversion of God’s will for sexual holiness” and tries to “transform” gays and lesbians from being “broken sexual sinners.” Focus’ resident ex-gay, Jeff Johnston, who said recently that there are “a variety of roads into homosexuality,” described the “sexual brokenness” that Restored Hope purports to heal:

Sexually and relationally broken – just think about it for a minute:

This is how conservative Christianity describes homosexuality, as “Satan roaming the earth like a lion.” It leaves no room for the very true love that same-sex couples have for each other, nor the families they are raising across this country. According to Focus on the Family, they are defective people destroying society who need to be fixed and erased.


This whole anti-gay batshitery has a major flaw:   as the human genome project has revealed, there was no Adam and Eve and hence no "Fall."  FOTF and its allies continue to choose ignorance and bigorty rather than embrace modernity and admit that the Bible is a work of mand and anything but inerrant.
Posted by Michael-in-Norfolk at Tuesday, September 25, 2012

Email ThisBlogThis!Share to TwitterShare to FacebookShare to Pinterest
Labels: Adam and Eve, Bible as justification for evil, change myth, ex-gay for pay, ex-gay frauds, Exodus International, Focus on the Family