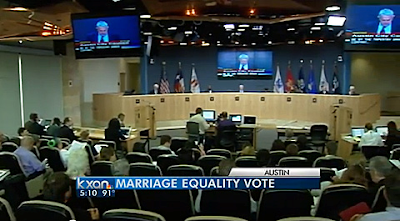 Earlier in the week I noted that the City of Austin, Texas was poised to take up a resolution endorsing gay marriage.  As it turned out, the vote to pass the resolution was unanimous.  There must be some serious spittle flying among Christofascist groups like FRC.  Here are highlights from KUT News:

Today Austin became the first city in Texas to pass a resolution in support of same sex marriage.  The measure passed the City Council unanimously this morning.

Before the vote, local civil rights groups declared their support for the resolution, which was sponsored by Mayor Pro Tem Sheryl Cole and co-sponsored by Mayor Lee Leffingwell and Council member Laura Morrison.

Council member Morrison acknowledged the progress made within the Austin community, when it comes to civil rights, but said there was still a ways to go. Morrison pointed to practicality when making her point.
“Marriage equality provides important legal and economic protections including access to health care, parenting rights, property rights and other protections,” said Morrison.

The practical implications of the resolution are unlikely to be great. In 2005, Texas voters approved an amendment to the state constitution, banning same sex marriage and civil unions. Travis County was the only county in the state where a majority did not support the amendment.

Posted by Michael-in-Norfolk at Friday, September 28, 2012